In past years, when I was traveling over the High Holidays I had to make the decision as to whether or not I was going to seek out local services (and deal with questions, the occasional bit of hostility, and unfamiliar melodies) or just hang up the formal and do whatever on my own.

Then there was the Pandemic and the explosion of web-supported broadcasting.  Not only did it premaritally change the face of continuing education for a lot of field, but smart religious organizations started broadcasting whatever day/time services. For travelers it was a great boon. For those who had been house bound before the pandemic, there were now options, windows open into the wider world. You could find something that matched both your beliefs and language, if not always in a convenient  time zone.

Now, education on line is not a new thing – in terms of MOOCs (massive open on-line courses) as both EdEx and Coursera were on line when I started looking in 2011. Admittedly, the lectures were recorded, documents could be downloaded, and discussions were only kind of live. And distance learning from some universities and community colleges has been possible for years. And we all know that TV Evangelism has been a thing for decades.

But what has changed is interactive streaming technology. It isn’t just Zoom, but WebEx, GoToMeeting, (not Google Meet or Microsoft Teams – both can suck), RingCentral, Discord…. and the list goes on depending on your home language, location, and preference. Most people say “Zoom” no matter the actual software. Kind of like Xerox, Kleenex, Hoover, where names have escaped into general usage.

Anyway, this is all a preface to saying that the JSP (JewishStudioProject) in conjunction with the East Bay JCC (Jewish Community Center) held a fabulous set of services. No, it is not the same as davening in shul, but a wonderful alternative.

and the silly picture of the day? 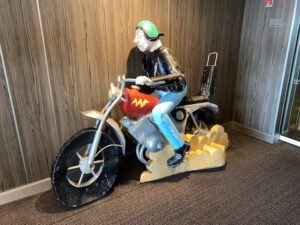 Located forward on Deck 14 in the Portside corridor leading to the pool deck/Solarium.

fiber person - knitter, spinner, weaver who spent 33 years being a military officer to fund the above. And home. And family. Sewing and quilting projects are also in the stash. After living again in Heidelberg after retiring (finally) from the U.S. Army May 2011, we moved to the US ~ Dec 2015. Something about being over 65 and access to health care. It also might have had to do with finding a buyer for our house. Allegedly this will provide me a home base in the same country as our four adult children, all of whom I adore, so that I can drive them totally insane. Considerations of time to knit down the stash…(right, and if you believe that…) and spin and .... There is now actually enough time to do a bit of consulting, editing. Even more amazing - we have only one household again. As long as everyone understands that I still, 40 years into our marriage, don't do kitchens or bathrooms. For that matter, not being a golden retriever, I don't do slippers or newspapers either. I don’t miss either the military or full-time clinical practice. Limiting my public health/travel med/consulting and lecturing to “when I feel like it” has let me happily spend my pension cruising, stash enhancing (oops), arguing with the DH about where we are going to travel next and book buying. Life is good!
View all posts by Holly →
This entry was posted in Cruising, Jewish Life, Travel. Bookmark the permalink.