is a new port to me. I am sure that I saw it from the air one of the many times that we flew in and around Split and Dubrovnik (still referencing the 1995-1998 time frame). I had thought about going into the small town, then learned it was one of those – town a distance a way, have a nice $12 shuttle ride.

There is something inside me, or perhaps my desire to hang on to whatever is in my pocket, but docking outside of town then charging me for the ride just raises my hackles. When that happens, I normally opt out of play. Besides, what I really want to do is get a nice walk, a long walk, without having to spend an hour on the treadmill.

After contemplating for a while – I decided just to walk toward town and see what happened. Zadar has invested in sidewalks, so that wasn’t an issue. You could see where the old industrial areas had been:

There was still the occasional house which reflected the standard method of destruction;

with the roof blown off

and greenery growing inside

in which one shoved the family out at gun point, set burning candles in the top floor, then turned on the gas and ran. With all the windows closed, the house fills up with gas. The gas is ignited by the candle and an a fireball ensues. Usually enough to incinerated everything inside plus blow out all the windows….)

In contrast – there were small orchards and vineyards along the main road:

a variety of boats

and a park where the old walled city used to be.

On Saturday, most of the shops were closed, but there was a small street market with locally made products set out for the tourists and glimpses of the archeological foundations below the present town.

the square full of tourists 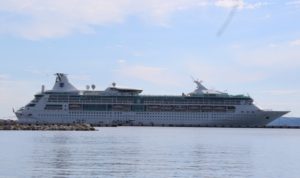