There are serious limits on George’s diet right now. Processed foods are fine, prepackaged complete with preservatives and fixatives. But nothing fresh, nothing from outside that doesn’t fit into the above categories, and certainly nothing home made.

UCSF runs an a la carte menu for patients. Rather than trying to come up with multiple daily menus, balanced meals and pap that no one would possibly want to eat – they actually treat patients as adults and let them order anything they are allowed to have off the menu. Up to six times a day. The only limits actually being the times of day that the kitchen is open.

But they have breakfast all day, soups, snacks, pizza and entrees after 1100. There are options from more than just the standard middle America fare, the ice cream (available in vanilla or chocolate) is Hagen Das, the vegan shake option smells horrible.

Last spring, the pudding option became one of George’s favorite and I had to find a local source for the first couple of months home before the novelty wore off. The yogurt wasn’t to his liking. A couple of days ago, I noticed that the Peet’s I have been stopping at on the way in morning carries smallish containers of his favorite brand of yogurt. It is prepared. It comes in a sealed container. He is allowed to have it, along with canned vanilla lattes.

It is a nice change from bananas, crackers, and peanut butter in single serving containers.

a sneakily simple knitting pattern from Martina Behm – takes one skein of sock yarn and is all garter stitch. 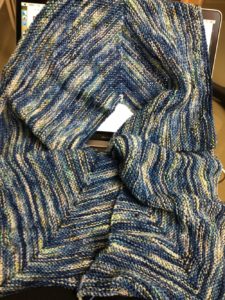