↓
Home→Fiber→Cross-Stitch→Where do I even start

to adequate recount this day of insanity?

Do I start with the train station in Cincinnati? 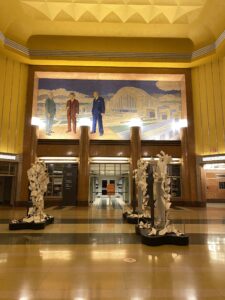 One of the wall murals

with a closer look ( click on it for a better view) 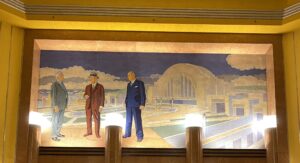 which is why I think it is WPA

(but actually the construction started in 1927 according to Wiki – the history is interesting – you might just want to follow this link...

My misfortune and challenges continued – that train that was due to take me to Chicago, departing at 0127? It didn’t arrive till 0337…. which meant that I was staggering with exhaustion before I finally crawled into my compartment and attempted a bit of sleep.

the second bed slides down

I had sent my alarm for 0900 just so that I could have some breakfast before exiting the train. Breakfast is included, so why not? That 0900 breakfast was not an hour before arrival. We were now almost three hours late. Considering the run from Cincinnati to Chicago is supposed to be under 10 hours, this doesn’t exactly bode well. And, for those of you in Europe – passenger trains in the US (and Canada) don’t own the tracks, they lease time from the freight rail companies who own, control, and repair the tracks. You see the problem? Not to put too fine a point on it, but if CSX has a choice between delaying their own freight runs or inconveniencing Amtrak – the choice is pretty obvious, now isn’t it?

Any – it was after 1300 when we arrived in Chicago. The track portion of the train station is below street level and one of the most confusing architectural constructions I have ever had the misfortune of navigating. The signage was almost non-existent The concourses were packed with people (many of whom seem to think that a mask over their mouth or down around their chin is both protective and compliant – but that is a different soap box). It took me almost 45 minutes to navigate my way out of that maze to street level. I never did figure out how to find the track for the California Zepher. Train was due to depart at 1400…..

Somewhere in the back of my mind, I was still fixed on O’Hare Airport. I had looked up the train route – the CTA Blue line goes there. Clinton Street was the nearest station. Guess what? That station doesn’t have elevators – and me with my suitcase and backpack…..

It was after I was on the Blue line that the little light finally went off in my head. The Blue line goes to O’Hare. O’Hare is not the same as Midway. When I double checked my reservation this morning – the three letter airport designation was MDW … not ORD…. Ok – I need to be on the Orange Line. Change at Clark/Lake coming up. Elevators!! YES!!!

An almost empty car to the end of the Orange Line, I made the hike to the terminal (it is indoors and I was grateful for the air conditioning. Not that hot, but the humidity….) In recent years, most airlines will not allow you to drop off luggage earlier than 4 hours prior to the flight. It is now 1500 and my flight is scheduled at 2150. But there is an earlier flight and the change fee is not that great. I consider it. The USO is on Concourse C which means I can’t get there without going through security (who won’t let me in this many hours early and besides – I have to check a bag because I have scissors…)

Clutching my boarding pass for the earlier flight, I suffer through TSA. It isn’t TSA. It is all the people who can’t seem to understand that they are included in the “Take off shoes, belts, empty your pockets, no drinks, and anything electronic larger than a cell phone needs to be taken out of bags” Today’s Can’t Follow Directions award was won by a young person sent back SEVEN times….

I find the USO and the very nice Mary who staffs it every Monday. It is at this point I look at my boarding pass. States I purchased it at 1500… and the flight boards at 1730. Ok, fine. I check the airport App which tells me that the flight leaves in 20 minutes… WHAT??? I dash back out, down to B1 – the flight isn’t on the B1 board – instead it is stating Denver. Just then I hear the gate announcement “For those of you waiting for the Oakland Flight, the plane hasn’t left Flint Michigan yet. We are expecting a 1730 boarding for your flight. We are sorry for the delay…”

Ok, back to the USO where I charge my phone, have a sandwich, tuck some money in the donation box, and relax for a while. This USO is tiny: one table with three chairs, a couch with matching chair, a bookcase, two recliners tucked in a back corner, coffee maker, microwave, and an double doored industrial fridge. Keeping an eye on my flight – the airport keeps saying that it left at 1530 – the Southwest App lists it at delayed, with a new gate of B19. Why not walk a little further? It is not like I am tired or anything.

After suffering through the delay and the protracted boarding (this is a full flight) I am finally on board. Tucked in a window seat near the back, I slid my backpack in the overhead and my carry bag under the seat in front of me. The lovely woman, about my age, who takes the middle seat is from Hayward. She and her husband were returning from visiting his 95 year old mother who lives near Chicago. We talk Bay Area. I get treated to some incredible garden photos, she “appreciates” our battles with the deer.

Then we get the announcement. Due to the outside temperatures and humidity (and the short runway) our flight is 4000# too heavy to be able to safely take off. [queue groans…]. Wait while they try to figure out options…

(the obvious -cargo to be off-loaded? No – there isn’t any on this flight. What they don’t say but I have figured out is that there is only one later flight. That flight is full, so offering to move people to the later flight just isn’t an option. Offering people money/coupons to travel on another day isn’t going to net them the 20 or so that have to be off-loaded before we can safely take off…)

The final option? Different aircraft… So, with much grumbling everyone troops off the plane and heads to B21, our new gate. That airplane arrives and off loads its passengers. And off loads passengers, and …. you get the idea. I think the cabin attendants finally went on board and hauled the last few stragglers off the flight.

We line up again, board again. I wind up in almost the exact place in the plane, this time seated with the woman right behind me in the boarding order. Our middles seat? The husband of the lovely lady with the garden pictures. It is after 2000 before everyone is finally settled  on the plane. (Note, this is still the 1530 flight). The quiet little chant in my head is reminding me that I will still be home sooner than if I had stayed on Amtrak. And it still was cheaper than the $1200/upgrade that it would have cost on Amtrak to get out of the coach seat….

Four hour flight to California, minus two hours of time zone change. I am totally and completely wiped. My headphones are in my backpack, I can’t concentrate on reading. Stitching is so not an option. After much maneuvering post landing, we taxi to the very last gate on the terminal. Of course. (Did I mention the poor unhappy baby two rows behind me? Accompanied by mom and sibling? Two more siblings + dad were in the row behind me. – queue seat kicking…)

George, ignoring my crankiness, just helped me out of the airport and into the car. It was just shy of midnight.

If I had stayed with the later flight, I wouldn’t have landed till just short of 0200…..