One of the other Cruise Critic members had organized a relatively small group out to one of the natural rainforests and waterfalls for our second day in Fiji. I figured that anything getting me safely out of town with a chance to take pictures might not be a bad thing to do.

(as an aside, I think I might have done better with the ship’s tour. Not because I didn’t have fun and some peace and quiet with the group I joined but because they came in from the river side at the bottom of the falls. We started from the top and simply didn’t have enough time to get all the way to the bottom and back up.)

It was about 40 minutes out to the National Park where we bailed off the bus. My buddy Brad (we were stationed together in Heidelberg circa 1993…) became my trail buddy/hiking victim. 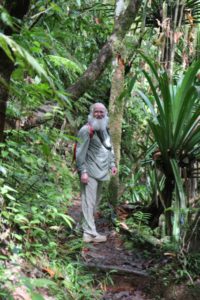 Cheré had enough sense to back out of the trip when she heard the term “hundreds of stairs.”

There were trees, there was quiet. There was even a fairly well defined and maintained trail which we followed.

Other than one small group, we really didn’t see anyone else till after we hit our turn around point and had started back up. A slight issue with wet soil and heavy passengers on the bus was resolved –

after unloading the pax and really gunning it out

Taking a different route back, we passed a number of Maritime institutions and training locations, some fabulous homes and some not so much. What should surprise you was everyone’s interest in this lovely park –

the real attraction? It is a free WiFi spot 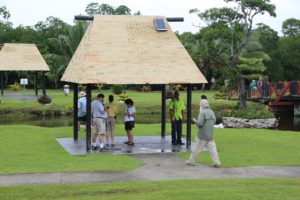 for which they were willing to brave the rain

We were selfie-stick free which was all to the good. 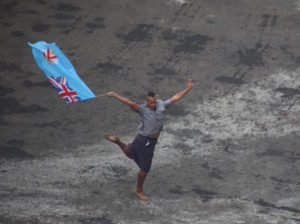 with music and dance as we prepared to cast off