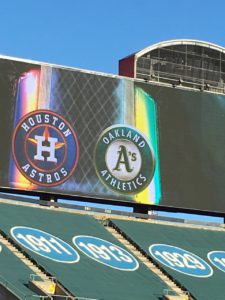 For those of you who follow baseball, we watched in amazement as one of the Houston Astro’s relief pitchers managed to walk three in a row. The first was “ok” but loaded the bases. The next two – not so much. I’m not really sure how players felt about scoring by being walked in. Certainly the two in turn sauntered along from third base to home with a wave or two to the crowd just to make the point. The upshot was that the score was 6:3 at the end of the inning. 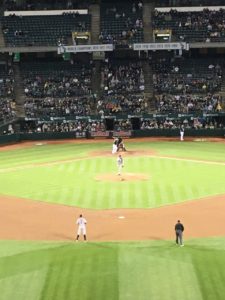 Bottom of the 6th

The final score was 7:4. Even the A’s didn’t manage to snatch defeat from the jaws of victory.

It was late when I arrived home. The game started at 1900 and ran over three hours. Then it was home on the BART. It is July which is reputed to be one of the warmest months of the year. I am wearing a hiking shirt topped with a light weight fleece pullover. I have angora socks (from Iceland) and a pair of toasty warm fleece pants. Once the sun went below the scoreboard it seemed that the temperature plummeted as the wind started to rise. I added my fleece tunic and planned on pulling up the hood when things got chillier.  Sitting in the Plaza Reserve (great view, cheap seats) has taught me that it can be “cool.”

Remember when I remarked about not knowing that most ballplayers had gone to long pants sometime in the last 20 years? Someone forgot to give the Astro’s the memo. 7/9 were wearing shorter pants with dark socks. For teh average player it probably doesn’t matter leaving it a personal choice of style. If you are Jose Altuve reputed at 5’5″ to be the shortest pro-baseball player (not in the above picture) this particular fashion choice makes you look even shorter. But compared to the three girls down a few seats huddled under SF Giants fleece blankets – at least he knows which team he plays for….

My house guests leave in the morning and I figured out that an 0830 exercise class is just as good as 0715 and leaves me a few more minutes of sleep…..