Ok – here it is – the travel plans from today through the 16th (actually cribbed from one of the Alumni sites, while the Map comes courtesy of the UK National Trust. What is apparent is that Ponant is doing very well in partnership with the more expensive travel agencies to run this route several times a year and make money while doing so.) 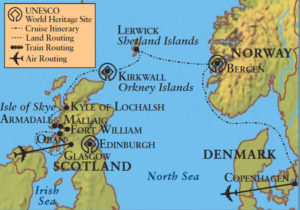 Now obviously we made our own travel arrangements in both directions (see yesterday for more clarification. Or maybe the day before?). When I double checked and found that the ship comes into Greenock (and not up the Clyde) I was doubly glad we had agreed to meet the group here in Glasgow rather than at the ship.

Even given my bad attitude at times I can hardly turn down the chance to ride the steam train used for the Harry Potter movies, take lots of photos and otherwise enjoy myself since I am here. If all else fails, I have eBooks, I have audiobooks on several devices and two choices of headphones. What I don’t have is a USB cable. Go figure..

[As should be obvious, I made it to the hotel last night. The plane landed around 2230, only about an hour late. Getting off the plane, we were held up for another plane coming in, then a line up of people boarding before the corridor was empty for us. Sitting on the bus I was starting to get anxious – last bus was 2330… A lovely woman next to me on the bus asked where I was going and when I answered CBD Glasgow she said that was where she lived and offered me a ride. Not being completely foolish, I took Francis up on her offer. Had a lovely chat all the way and in spite of the road diversions (you can see it, but you can’t get there easily from the M8) I was at the hotel less than an hour after we headed out the door to parking. Now I am hoping she makes a trip west so that I can repay the hospitality.]