As we pulled out of Vancouver almost three hours after our original planned departure – I started to wonder about our time in BC. There is an issue about tides, bridge heights and large ships which I was interested in seeing. But it was dark, except for green lights on that bridge and the ship sailed so quietly that I hardly noticed we were moving.

Our hours in Victoria, BC were to be ~ 0830 to 1700 give or take clearance, arrivals/gangways, and all-on-board times.

Jill, Graeme, and I left the ship shortly after 0900 and wandering slowly towards downtown. No big hurry since our destination didn’t open till 1000.  Button and Needlework Boutique is right downtown. 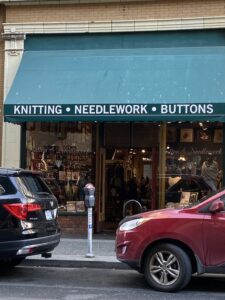 There was a huge selection of knitting needles & yarn. A fair amount of crewelwork & embroidery. Some cross stitch patterns (mostly regional), the complete line of DMC floss and a scattering of the common overdid floss. I skipped the fabric section completely and bought one pattern for a present and two skeins of DMC 4090 which I had been completely unable to find in the US.

At this point, I was tired and started the ~ 3km back toward the ship, with stopping at a few tourist shops and some interesting sights. 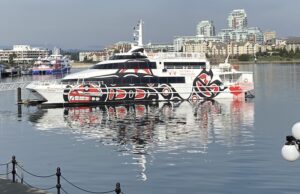 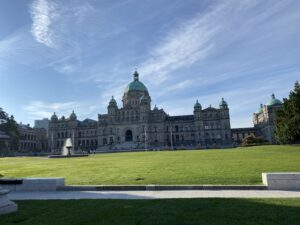 Various assorted plant sculptures which included this particular horse (called The Judge) in one of the hotel courtyards. 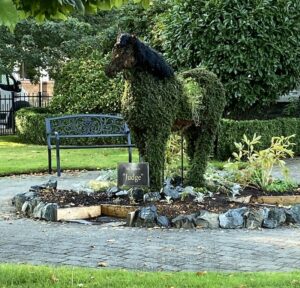 I passed the Fisherman’s Wharf both going and coming but knew better than to go exploring. 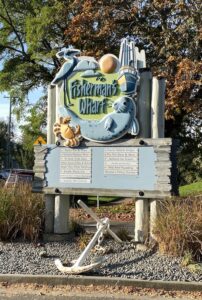 and finally, pretty wiped out for hiking under 5km, managed to get back to the ship. 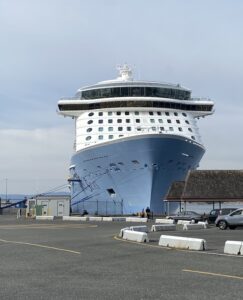 And now the “final” comments for the day….

the next days will be at sea. What you are mostly going to get is ship exploration and the occasional silly picture 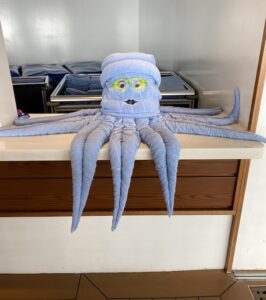 I may/may not bother with any of the formal activities: Example – tomorrow is the Top Tier Party at something silly like 1000. It also happens to land time-wise on top of Yom Kippur Services. Obvious my choice..

there will always be the stitching update. And maybe the book/audio book update. 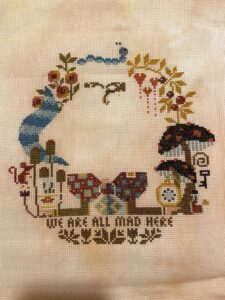 For. those of you observing Yom Kippur – may your prayers be heard and your fast be light.

fiber person - knitter, spinner, weaver who spent 33 years being a military officer to fund the above. And home. And family. Sewing and quilting projects are also in the stash. After living again in Heidelberg after retiring (finally) from the U.S. Army May 2011, we moved to the US ~ Dec 2015. Something about being over 65 and access to health care. It also might have had to do with finding a buyer for our house. Allegedly this will provide me a home base in the same country as our four adult children, all of whom I adore, so that I can drive them totally insane. Considerations of time to knit down the stash…(right, and if you believe that…) and spin and .... There is now actually enough time to do a bit of consulting, editing. Even more amazing - we have only one household again. As long as everyone understands that I still, 40 years into our marriage, don't do kitchens or bathrooms. For that matter, not being a golden retriever, I don't do slippers or newspapers either. I don’t miss either the military or full-time clinical practice. Limiting my public health/travel med/consulting and lecturing to “when I feel like it” has let me happily spend my pension cruising, stash enhancing (oops), arguing with the DH about where we are going to travel next and book buying. Life is good!
View all posts by Holly →
This entry was posted in Cross-Stitch, Cruising, Fiber, Travel. Bookmark the permalink.