I have my sense of humor back. At least as much a sense of humor as I ever have. That particular ability has been called into question more than once. My back is now reasonably straight and the trash is out of the car.

Just a suggestion, if your dear spouse/partner/friend/whomever suggests driving down US #1 aka the Coastal Highway to get from Northern California to the Bay area your answer should be a resounding NO! Preferably at the top of your lungs. Unless, of course, you don’t mind taking about 13 hours to make a less than six hour drive. Ok, discounting the 45 minutes spent finding cell phone coverage (which George needed for his 1700 conference call), it still took too freaking long.  The road is beautiful, twisty, curvy, slow, full of RVs and gawkers and most is completely without people, call boxes or cell coverage. i.e. make sure you have fuel, a good operating car and no significant risk of a breakdown. We didn’t do any of those, but others obviously had.

The photo opportunities were amazing, the wind chill and the camp grounds packed. I will leave aside the question of why people who are obviously interested in getting away from it all wind up packed cheek by jowl into Camping Parks, National Parks or State Parks with 150 of their new very best friendly RVs, Campers, 5th Wheels and tents.  I can see the attraction for the view (if you are seeing something other than the next set of campers) and toilet facilities provided for you. But still, it is more crowded than your typical Section 8 housing.

Avenue of the Giants

Heading west on CA 299, we went south on HWY 101 at Arata. Instead of staying on 101 all the way this time, we made a few stops along the Avenue of the Giants a large portion of which falls into 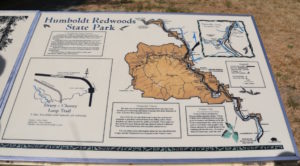 We made stops at both Drury-Cheney (no relation to politics) and Founder’s Grove.

many of which have fallen

traveling between the redwoods

what the root system of a fallen tree looks like

burst of gigantic “splinters” from a tree fallen this season

earlier than the Viking’s Visit to Vinland

We stopped for lunch, at a gallery but the Eldest was spared a tacky garden gnome and made the unrecoverable decision @ Leggett to drive to the coast. No doubt, it was beautiful even after the fog and mist started rolling in. It is more a matter of limited choices of alternative roads. FYI – please remember no cell coverage means no cell phone accurate GPS. Your phone can show your route current position. Because of programing, most can’t calculate routes without the Comms satellites. The hills aren’t exactly bristling with repeater towers..

the occasional bit of “straight” road

yes, those are sea lions

Abalone Point, the road not taken

We made multiple stops along the coast; it was then I started seeing the crowded RV parks and campgrounds.

Shall we leave it with – lots of fantastic scenery – and being glad to see my own bed at the end of the day?