I am sitting here reviewing photos from today and listening to the monkeys making more noise on the roof that I used to hear from the siebenschlafer in Heidelberg.

Since I had already done the Himalayan and Everest Viewing tour, I elected to not do it again. Not that it didn’t mean I wasn’t up early, but extra time to sort out ones things is always appreciated.

I have a couple of thoughts before I start sharing the photos. The first is that if you came here and didn’t know about the earthquake what you see would be interpreted as a country trying to restore monuments/temples/buildings that had seen wear and tear over the years. Other locations – Thailand, Greece, Turkey – have dozens of sites where bits and pieces (some weighing  tons) are piled up waiting for a building to be reconstructed. So old things needing to be put back together isn’t unusual and the fact that Nepal has the craftsman and the will is all the more to the good.

Of significant impact are the internal refugees/homeless. The government will restore public buildings – but in a country where the per capital is ~1200, if your home was destroyed you have a serious issue. No home, no money to repair/replace. I think it is worse for those in cities. In rural villages you have family and know your neighbors. Likely you are all in the same situation. In the city, you are in tents 8 months later while cars, motorcycles and trucks drive by on the road. You don’t have a garden, you can’t produce your own food 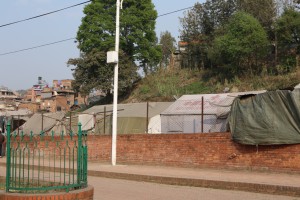 many still living in tents

First thing in the morning we went up the steps to what I am thinking as Shiva’s temple hill.

gate to the hill

There are dozens of small temples and shrines. There are holy men, tourists, Nepali come for blessings.

Trident as a symbol of Shiva

there are other gods

sighting down the line

Coming down from the hill, we walked along the river back where all the cremations take place. It is daylight. I will spare you both the sights and the smells.

Also known as Bhagdaon, the Malla Empire crown city dates from 700 years ago and has been designated an UNESCO World Heritage Site. Other names include “The City of Devotees” in case you are hunting around wiki for curiosity. The whole site is four square miles with Durbar Square as the center. Since this will be the third Durbar Square I have encountered this week, I hopefully will be able to find out the background of that obviously more modern name. The damage done by the April 2015 earthquake was extensive – with about half the historical buildings completely destroyed and most of the rest suffering damage. So, the reason for the big, heavy pieces of wood up against buildings should be pretty obvious.

groups of monks out

The stairs used in “The Little Buddha”

many windows on the upper floor (Moguls didn’t let their women out….

You could also buy tons of beautifully made shawls for 1/2 the price as in India. Or souvenirs, or handmade paper or …. puppets – of many faces

Just as a heads up – tomorrow we fly to Pokhara and head out on a few days trekking. As should be obvious, I will have neither wifi nor internet access and will catch you up when I return from that hike.