0600I suppose it is a better location than around the Port on the sdewalk when it is cold but still I don’t think that any of these African men would be chosing to sleep here huddled up against a wall had they another choice.  Out of the weather, temperature moderately controlled and each with an identical natural colored tarp on which to sleep or roll up meager posessions.

It makes all of those parading up La Rambla wearing or waving flags for Catalon Independence seem pretty trivial in their outlook. The men with their flags on poles and not being careful of on coming pedestrians; the women wearing flags tied around their necks as capes.  I must be too American, I just don’t see a country flag as an article of clothing. But that is just me.

I spent a pleasant couple of hours in a nice coffee shop next to Hotel D’Arc before moving on through the streets. It is obviously December; there are decorations everywhere and not a sale insight. I even went through the offerings at Desigual and didn’t spend a dime (or a Euro).

On the way back to the ship I almost went into the Maritime Museum. I have been there before several times – and the added bonus would have been the Game of Thrones Traveling Exhibit. But the place was packed and it is not like I haven’t seen a few costumes, weapons before. And since I have already had a chance to sit in the Iron 0806Throne I didn’t see the point of looking at it from the other side of a roped off area. 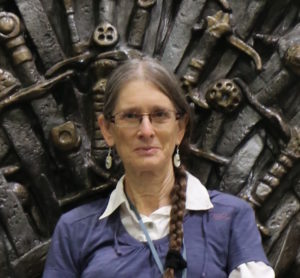 (back at LonCon when I had long and brown hair)

and we will totally and completely ignore the chaos that was BCN Terminal as 1000+ tried to board at the same time that 4K+ were returning to the ship. Not organized is putting it mildly