There were two museums left on my list that I really wanted to see: The Whistle Stop (Train Museum) and the Military & Colonial Heritage Museum. So after stopping at the bakery just around the corner – excellent coffee and buns – the three of us headed into Maryborough at a reasonable time of the morning.

Now, I don’t know if any of you are interested in model trains, the history of the railroad (pick your country or another), or transportation in general. There are train enthusiasts, automobile enthusiasts, and aviation enthusiasts, Maryborough has two important historical bits – The Walker Company (now a different company) built railroad cars and engines here – and there was. lovely station right downtown.

[side bar – that station is still there, the train is not. the closest the passenger line comes is on the outskirts, but there is a courtesy bus that runs from the old station – leaving from Bay 4 – to get passenger to the new station. Less expensive that redoing the spur?]

Now there is an active group of volunteers who run and staff the Whistle Stop and the associated Mary Ann steam train. The hours are a bit limited so it was our first stop this morning.  The place was crammed from floor to ceiling with this & that from the local railings. There was everything from staff uniforms to signage to engine books. to heavy sections of tie. The visit cost a whole whopping $2au. Yes that is correct. One of the volunteers spent significant time with us, both describing the various bit & bogs and provided a tour of the station master’s office as well. They still have the original station clock, the teletype machine, the switchboard…… 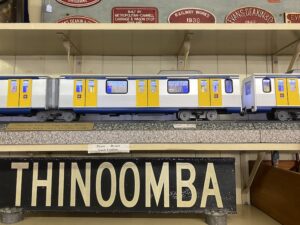 there is a model (close to G gauge) of the trains the local company made for the last Olympics here. Pictures of trains made for other countries. And we were treated to a description of that companies new expansion a bit further from town that will take their number of employees from 400 to almost a thousand.

there was the obligate model set up – donated by a community member after her husband died. It was pretty English in character and set up. 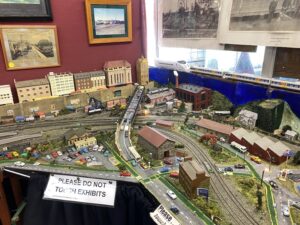 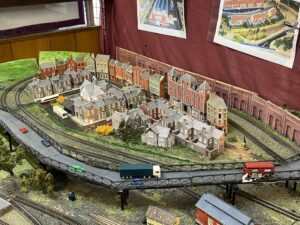 We have an invitation to stop back in the morning when a couple of the volunteers will be opening a back shed or two and working on both the Mary Ann and Engine #299.

From there it was on to the Maryborough Military and Colonial Museum – the Wiki article is here and their website. This area of Queensland has disproportionately contributed military service members over the decades. Unlike many military museums – this one is not focused on weapons, machines, but rather on the soldiers. 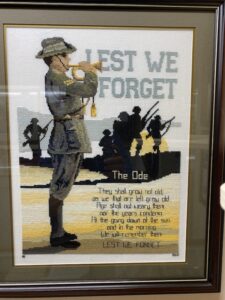 The three floors are well laid out, organized and clear. It is all about the individual stories of those soldiers and sailors, expanding to include the airmen with the onset of aviation. I spent more than a couple of hours there just reading the stories, looking at the mementos contributed by family. The second floor has a section on Gallipoli. The Australian dead numbered almost 9000…. 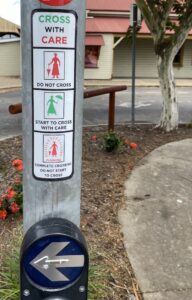 the walk signs in town!