In case you hadn’t heard, there has been a fair amount of unrest in this area of India. For a country that claims no discrimination (women, religion…..) the caste system is still alive and well. Instead of calling it quotas – there are “reservations” which in this case mean jobs/school slots reserved for certain castes. In this case we are discussing the Jat Caste which actually forms the majority population in several government regions. There has been rioting, significant looting, fighting. In return the Indian Army was called out. Of course there is the touching story in the paper of a bride being transported by the Army to her wedding (the auspices would not have allowed the date to change…..) but this is no way counteracts the damage to the major canal supplying water to Delhi.

Why am I telling you this? Well, the train schedule has been severely impacted. Smart governments don’t run trains through riot areas. Trains on the far side hadn’t been able to return. Passengers get stuck. And today was the first day the trains were really running. So there we were, our group, the parallel OAT group and about a million India citizens wanting to take the train. We made the train as we had reserved seats. Our luggage didn’t since the rail ditched luggage cars in favor of more general class cars (benches, no reserves seats and perhaps no passenger limit …..). Our three hour train journey took little more than three hours.

After transferring to a bus and having lunch stop, we drove the rest of the way to Khajuraho. Although there had been nothing on the schedule, our guide let us know that the annual dance festival was taking place.

and off we went –

It was free, open seating and we were fairly far back. The Temples were visible in the background. The two women we saw perform were accompanied by several instrumentalists and two singers (all male). The music is not to my taste but the whole performance was well integrated. Obvious limit to my lens…. 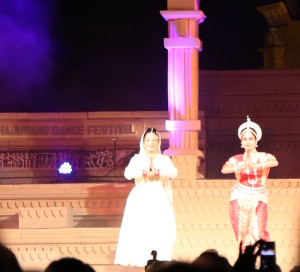 performing the second of three dances

and we looked at the booths on the way out… 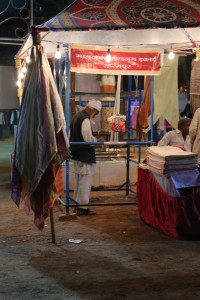 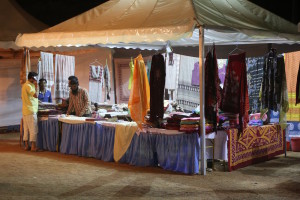