A long time ago – oh let us say May – I made a couple of appointments for myself. Figured that George would be well past the time that he needed to go to UCSF twice a week, and besides, his appointment days were Monday and Thursday. So here I am, end of August and needing to be at the VA at the same time he needs to be at UCSF. He did agree to be dropped off early so that I wouldn’t be late.

Imagine my surprise to find that there was essentially no traffic at all heading to SF over the Bay Bridge. I mean, zero back up at the Toll Plaza at 0815 on a Friday morning. There is normally more traffic that that at 1400 in the afternoon or 0200 at night. Dropped him off at UCSF, went to the VA.

In case you are wondering why we didn’t do it in the other order (besides the fact that I don’t really want him driving right now) it is simple. UCSF charges $4/hr for parking. Parking at the VA is free…. 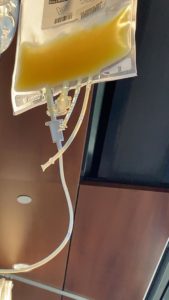 it is not ghee

(and a bone marrow biopsy).

traffic back was unusually light for a Friday afternoon.

Then we watched the As defeat the Yankees for the fourth time in a row (three in Oakland and now the first game in the Bronx).