Indulging in business class (which is why I was on Turkish Airlines as their cost was by far lower than any other airline (by thousands if you were wondering) meant I had a comfortable seat, good food and no one sitting next to me. Wifi was included for the flight. The mushroom soup that was part of supper was as good as any I have had in Chops (for those of you familiar with that particular restaurant on RCCL. The rest of the meal was equally good. This morning the fruit was fresh and the coffee strong. The only thing that is difficult for me is that the seat, even reclined and with padding are still pretty hard since I don’t have any excess padding. 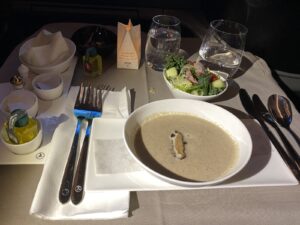 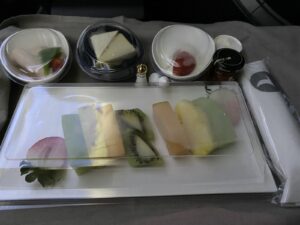 Landing in Istanbul, we arrived at a completely new section of the airport. The good and the bad – the signage could be improved for everyone. The Business Lounge wasn’t open, so I had to backtrack to the regular lounge. It is not the same as the old, wonderful two story lounge but still lovely. I found the “viewing” room which has a quiet full orchestra and choir concert playing on a large screen. I grabbed one of only about seven reclining arm chairs and have settled in for the duration. It is a lot of hours till my connecting flight to Barcelona

On the stitching front – I decided that I got a “long flight, new start” which is a pattern called “Roll the Dice” from ForbiddenFiberCo. Came complete – pattern, floss, fabric, bag. Excellent. Did I mention that it has only two colors? ` 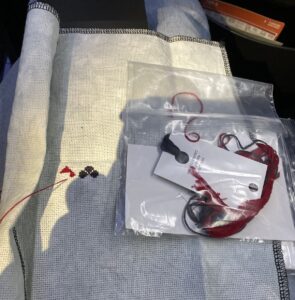