worth waking up at 0500 for a webinar out of University of Copenhagen.

And probably only because the original speaker cancelled which left Samir Bhatt filling in. He is a brilliant epidemiologist and systems modeler who clearly and succinctly walked the audience through what modeling can and can’t do; the value of scientific consensus; and the role of policy makers. He made no claim about predictions and discussed the value and limitations of various forms and quantities of data that feed all the predictive models. He holds joint appointments with University of Copenhagen and University of London.

I want to be that smart if I ever choose to grow up!

Meanwhile, I might just be back on PDT (Pacific Daylight Time) just as a bit of heat hit the area. It currently is 29*C (that is 85*F for the Luddites) which is down from the high. I wasn’t prepared for this much warmth. It is only April after all.

On the positive side – the deer haven’t shown up today. Our front patio is rather sunny which is great for my collection of solar flamingos but not great for plants or any critter that would want to rest in the non-existent shade.

Noah scanned several patterns for me, so now all that remains (!) is the process of skinning them in PC stitch so that I can load them into Pattern Keeper.

I have made significant progress on Jack Rabbit (~60% complete) – the 3rd/12 from Cottage Garden Samplings which means that I need to get going on converting Raccoon which is the April pattern. 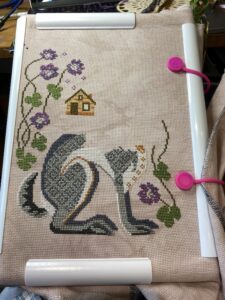 after adding about 550 stitches today I decided that there was no time like the present to get started on the Nora Corbett Aries – the third Zodiac Girl that I am tackling.  It took a few minutes to get organized and to change out the QSnap and fabric that I had chosen. There is being stingy with margins, and then there is just being stupid. These patterns have DMC floss, Caron Watterlillies and lots and lots of beads. By my count – about 20% of the 5011 “stitches” in this pattern are actually beads. Ugh. I also am not thrilled with finding that I needed DMC Light Effects for her “horns.” 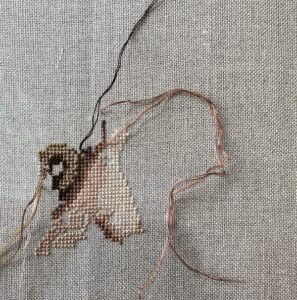 I need to catch up my Temperature Bookshelf which sat idle here in Berkeley while I was galavanting out around the oceans. And then there are some of the left overs from last year that I really, really would like to be able to count as finished.

This lifetime? or perhaps the next?