What are those? I was asked at the Cal Women’s Basketball Game this evening.

It was a much more intelligent question that the previous – What are you knitting? Are those Warrior Colors? 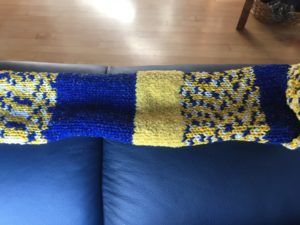 the start of a scarf

Hello? This is a Cal Basketball Game. I am sitting the CAL Bleachers. I am wearing the exact same colors (blue, gold, and a bit of white). I have no idea where the Warriors got their colors, but, since Cal has had Women’s Basketball since the late 1800s – I have a feeling that Cal had these particular colors first.

Anyway – back to the Owls – 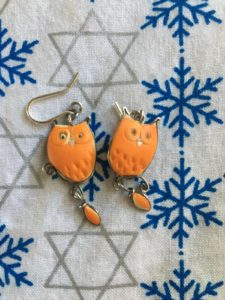 There is actually a nice history behind the owls. I purchased them in 2010 while on a P&O Cruise with Noah. We were headed up along the Norwegian Coast with with a great crew and a passenger collective that averaged age 74. Which doesn’t seem anywhere as old to me now as it was then. It certainly was a bit much for Noah who had age and interests in common with some of the crew. In Aleslund, after hiking to the top of the overlook to see all the islands which made up the town, I stopped at a Husfliden on the way down. Besides all the standard amount of Rauma yarns, fabrics, trims, and patterns for traditional garb as well as a number of lovely wooden handmade items, there was a case of jewelry off to one side. Sitting by themselves on the top shelf were these owls.

No question, these were my souvenir of the trip, even if they were in a color that I rarely wore. So now, when I am stuck on land, they bring back a bit of my travel memories.