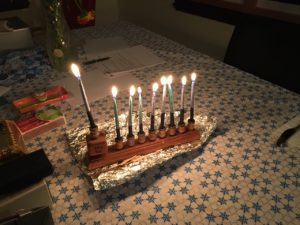 In which I will say that a year that started out fine became a lot more challenging. And, to misquote Connie Willis – “To say nothing of the dog[politic]”

January saw a vain attempt on my part to pretend that Berkeley was now home. Other than move all the clutter from storage into the garage, much of my month was spent in that wonderful state of denial. The one where I was still living the good life in Europe and traveling. To confirm that day dream, I managed to get my India Visa on the first go-round.

The early part of the month had to do with fractals, Ducky getting friends and continuing to try recipes in the tangine. The second half of the month was all about India. The massive numbers of people, the incredibly poor quality of the air balanced by the history, amazing buildings and the lovely people in my tour group. I did wind up getting a real feel for how the cast system worked (if you aren’t male and upper cast you have issues) and an appreciation of being from a country where what you accomplish is more important than the identity of your parents. I took a lot of photos…

I started in Kathmandu at a Regional Travel Medicine meeting with side bars into Altitude Medicine. The meeting was great, I was able to see some of the city and meet my tour guide for my upcoming tour. But first I had a detour back to New Dehli to join with the rest of the group and visit Bhutan prior to my return to Nepal. I appreciated both countries a lot more than India, the scenery was incredible in both locations (but the air in Bhutan was clean).  Again, there were great people in my tour group which over all was a bit younger than some of the other tours I have taken.

Ethiad to Australia where I was able to spend time in Adelaide with friends before traveling on to New Zealand to meet up with George. We spent time on both North and South Island. I discovered that the NZ answer to vegetarian was “something in a pastry shell.” Afterwards, while George headed back home I went on to the Gold Coast and visited friends before heading to Sydney. Taking the Explorer of the Seas back to the US pretty much used up the rest of the month

and a fair amount of time into May. By the time I got home I was tired. Not too tired to attend some Oakland A’s games, mind you. Just enjoying a respite from travel. For a few days anyway.

was a month in which I appreciated home and baseball games more than an alumni sponsored trip called “In the Wake of the Vikings.”  It turns out that I have an allergy to French run cruise ships (they don’t label the food and the idea of vegetarian meals seemed beyond them most of the time.  I love Scotland and was able to have lunch with a delightful colleague from my UK days, but didn’t appreciate the tour aspects. I think if I can talk to people on my own and can read the signs, I probably would be happier staying away from the tours…

Westercon in Portland over the 4th of July weekend. Hadn’t been in Portland except for a few hours in over five years.  I rediscovered my love of white water rafting and my dislike for long car rides. I was able to spend time in Colorado with a good friend (who is about to permanently return to Germany) and also see friends who I have known since my first (1981-84) tour in Germany. Once home- I attended a lot of baseball games.

Being a puzzle addict, and mind you only the expensive wooden ones, it was a delight to visit Liberty Puzzles in Boulder. World Con was in Kansas City this year with the Iron Throne once more in attendance. Paul & Storm were in concert as were PDX Broadsides.  I managed a quick return to a ship (The Grandeur) with Carmen when we sailed out of Baltimore to Bermuda and back.  Oh, yes and more than a couple of baseball games.

Baseball, house guests and an escape to Venice and the Rhapsody of the Seas. Oh, and we celebrated our 38th anniversary, moved Daughter #2 and SIL to Berkeley from Chicago and otherwise had a memorable month. I needed a vacation… from parenthood? retirement? the US?

spent on trips around the Eastern Med, the Middle Med and finally the Western Med.

Attended the IMED meeting in Vienna where the key topic was now Zika (as apposed to Ebola) and the discussions were around sourcing for surveillance and better integration of the marine, plant, wildlife, livestock and human health people. It was also about then when I admitted to myself that something was not right with my health and it was time to go home. Skipped the Navigator, flew back to SFO. Rest of the month was spent doing tests, appointments and not liking any of the answers.

which is where we are now. Like Fenton – my long ago and mostly forgotten NHL decided to come back and make my life a bit more challenging. Both family and friends have been extra-ordinarily supportive and understanding of me, my attitude and the occasional meltdown (sounds better than saying temper tantrum now doesn’t it). I have been lucky enough to have all four adult children in town for the past week. I’ve three (Noah, Dani & Alex) who I see on essentially a daily basis and Shana almost as much. The Maus has been terrific about checking in. George has been a rock.

I can’t say that I particularly enjoyed my overnights in the hospital (in fact, I can’t remember the previous time I stayed overnight in a hospital, might have been about 1981) but have managed to get through the first three rounds of immunotherapy without major difficulty. One more round and follow up testing to decided where we go next.

Meanwhile, I am sewing, cross-stitching, reading a lot of books and promising myself to catch up on all the things on my “when I get around to it list.”

This past year was interesting, exciting and followed by challenging. This coming year I can do with a bit less challenging and more family and friends. Travel is still in my plans, tho I may have to limit myself to less than 28 day jaunts.

This past year – ~ 23 countries, 53k air miles, 7 cruises, 3 ground based tours and endless enjoyment of family and friends. Next year – it will be even better.