We did a wandering tour through Aukland this morning while avoiding the occasional raindrop, looking at buildings, trees and whatever else caught our interest. 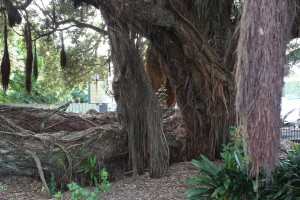 And found ourselves at the Fernery prior to going spending time at the War Memorial Museum,

The first floor of which is devoted to the history of both the Maori and the European Colonization of New Zealand.  There are the obligate inclusions of carvings, replicates of housing & boats, ornaments and household items.

The top floor is the actual military portion of the museum chronicling the New Zealand participation in various English Colonial Endeavors, the two World Wars, Viet Nam and the entry of the country into an extensive support of UN peacekeeping.  I spent most of my time here while our tour guides spent a significant amount of time on the first floor with the rest of the group. The military history interested me a bit more and allowed me to become a slight bit more familiar with the Pacific theater of operations – especially as it relates to WWII.

one of two stained glass windows

There was a bit of rain threatening, so most of the group (well, all but George and I) elected to take the bus back. Since it was easy to see both the harbor and the highest tower, it wasn’t hard to navigate back. As it turned out, we all arrived at the grocery store about the same time. We had change left for drinks…..