Khajuraho is the site of some of the most historic temples in India. Built by the Chandelas (hey, you can Wiki and Google easier than I can) more than 1000 years ago according to our local guide (except for the one which was built around 100 years agoand looks like it) they have lasted through religious upheaval, ruler and government changes, active use and the swarms of tourists that invade every year.  Obviously not all of the original 80+ temples have survived. He seemed to love the sound of his own voice, his message of love and tolerance of religion (as long as it is Hindu), women (as long as they stay in their place) and all peoples (since their caste determines what they should be and how they should act). Obviously, I am getting sick of a message that defies belief. I do get the concept of the men always walking ahead of their wives – should there be any landmines, he is the one to get blown up…..

I obviously liked the general photos of the temples

as well as the Elephants stomping people 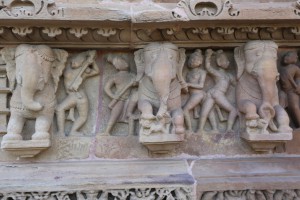 The actual grounds were beautiful

Our flight to Varanasi went smoothly (front and back stairs – we were in the middle of the plane) and smoothly transferred to the hotel before heading for an evening on the Ganges.

From the bus we boarded a small wooden boat with a motor so old that it has to be started with a crank.  After going along for about a mile looking at the various Ghat (sections of steps going down to the river – one after another for 3.2 miles)

we made a short pause at the crematorium. There were more than 15 funeral pyres burning. Each using about 700# of wood each. 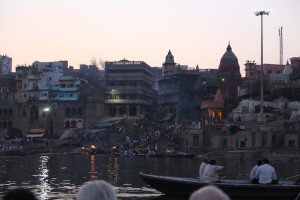 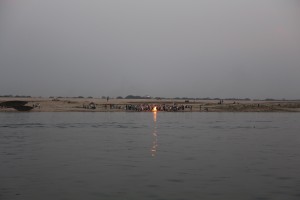 multiple pyres at the crematorium

across the river, extensive family doing their own funeral

Think about it – in such a poor country with extreme pollution – this much open wood burning (about 200 funerals a day. 170 by wood and ~30 with more the more modern electric method) just in this location. The cost of the wood alone is about $350, which in many cases is more than 10% of an annual salary.

Further on – there was a Thanksgiving ceremony being held at a major temple with hundreds of participants on the Ghat (think solid packed throngs) plus the dozens of boats crammed in on the river.

It was interesting, but with the amount of incense and the smell of burning flesh, I was glad to get back to the hotel and hopefully will stave off my impending migraine.