The couple of times I have headed to the VA it has been to the outpatient clinic in Oakland. They have all the basics of primary care including basic lab and xray. They can’t do anything fancy on the diagnostic side in rads, so I was afforded the opportunity to visit the much larger location in Martinez.

My choices were to get George to drive me or go to the Oakland site (south of me) to catch their shuttle bus to Martinez (north of me). Since my DH was willing to drive, why not have a comfortable ride?

The clinic was clean, well organized and running ahead of schedule. The woman who did my dexa scan has been working there since the mid-80s. The tech in immunizations “only” for 6-7 years. There maybe issues at other VAs, but at least this region seems to have it’s self together.

And, just so you didn’t think I was organized – 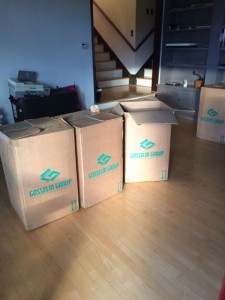 The guys brought in a few boxes for me to peruse. Unpacked a few things, sent most of it back to the garage to be dealt with in the future. Since we are looking at more renovations later this year as well as repainting in a few rooms next week – it doesn’t make sense to load up the house with things that will just have to be moved/covered up/hauled back out…..

Actually – as long as it is safely in boxes…. it can stay in boxes…