Navigator of the Seas – 13 days from Southampton to Miami followed by a flight back to Oakland on the day before Thanksgiving. I’d been feeling kind of crappy and decided to head home rather than not have fun for those same 13 days, especially the 7 consecutive going across the Atlantic. Have a flight tonight out of Heathrow heading home. 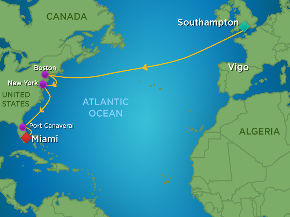 Actually, this is a simple solution to getting home from Europe. Never mind that I will preferentially take a ship anytime over flying when the costs are equal…. This ship is the same class as the Mariner which I sailed on a few years ago and the Explorer (which I took last fall and this spring just past). Bigger than I prefer, but the dates were just about as perfect as I could imagine. This was also the cruise which replaced the Rhapsody as my TA ship. The dates on that one conflicted with the meeting just past in Vienna, and since the cruise line asked me to reschedule due to their changing the departure date – I was paid with OBC to change ships. Confusing? Sorry, let us just say that I lucked on my obliviousness to the dates in the first place and wound up fanatically ahead for my ignorance.

any way – here is the

which will also potentially give me time to visit friends in Boston and see Maus while in New York before landing in Miami (where I can potentially go visit yet another friend…)  Obviously, I have no interest in flying on the 23rd. 24th? Now I can get into that (hotel + air on 24th < flying on 23rd…)