which is not great for the garden but certainly better than talking about the lack of Oakland’s pitching performance for the last three games. Shall I just leave that bit with “Cub’s have pitchers” and the A’s just couldn’t manage to get on base?

I’d like to think they have a chance against the Orioles, but I am not holding my breath. Going to the game tonight, yes. But not expecting anything for the performance….

Back to the boys who have been hanging out for day after day after day. Totally destroyed my lime tree along with beating down a patch through the landscaping on the hill. “We are not amused” even though they look quite at home. 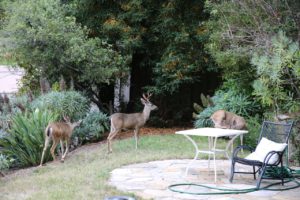 and now there are three 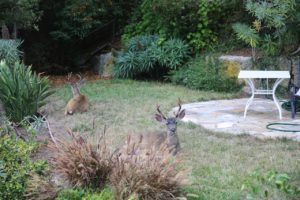 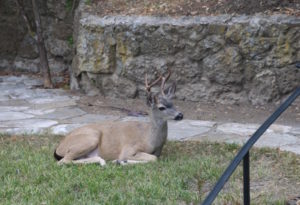 George went through his entire pile of small stones next to the door, managing to hit one of them a couple of times. Means that they left for oh, let us say about 15 minutes before they came back and settled in again. We don’t feed them. These three boys do look fairly healthy which doesn’t mean a thing as far as ticks or Lyme disease. The only thing I have noticed so far is that they don’t seem to like the laundry rack. So out it went with a couple of large RCCL towels flapping in the breeze…

(and before you ask – yes, we have tried just about every imaginable spray to no avail. They like munching on my plants….