It was about 1100 when I left home for the Oakland Coliseum. The temperature was barely 14* and it was overcast here in the “beautiful Berkeley” hills. According to Yahoo Weather the predicted high was only 21. It was partly cloudy at the ballpark BART stop and by the time I found my seat to have a bit of a snack the sun was beaming down. I obviously didn’t need my fleece tunic and the dark jeans I had worn to absorb the heat might not have been the best choice. With my new shirt (courtesy of a fan promotion) 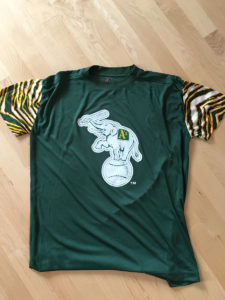 I at least had a short sleeve shirt to wear. This is the particular company’s fourth year at it. Last year it was sweatshirts, the two years before that it was pants/leggings… Some people had all the pieces on.

But back to my previous comment. Do you think I brought sunblock? After managing to get through last week without a burn due to the liberal application of same…. If I hadn’t picked up a hat – the fan store had nice ones on sale it would have been completely doubtful that I still had brains in my head.  The family behind me had sunblock and shared so that is probably why I don’t have blisters. 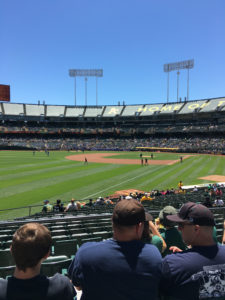 the view, with blue skies

There I sat, 3 hours in the bright sun enjoying the game from the third base side. As much as one could when your team pulls their first pitcher on the first batter (leaving the relief to deal with a full count).

The As tried a rally and tied the game, but then the Toronto Blue Jays gained two more runs in the top of the 9th. I will admit to leaving about then – 5 minutes to the next BART or 21 with everyone. I didn’t see a hope of the As coming back and I was feeling a bit crunchy.

Wound up with friends visiting and crashing for the night. Julia came out to join our dinner (sandwiches) conversation. When Noah arrived home from work he did the same. Pleasant end to the day. I don’t think I will be so deceived about the weather tomorrow – but it is an evening game.