Another one of those places where I have been several times. It is a frequent stop on Trans-Atlantic Cruises of which I have been on several (well, more than several to tell you the truth). Depending on the cruise line and the ship – this route to south Florida is usually known as the Southern Route (as apposed to heading across from the Baltics and going via Iceland). Stops are normally in either the Canaries (as this ship) or the Azores – usually Ponte Del Gado.

Anyway. The last couple of times I have been here I just did the wander around or take the tram over to the other side of the island and away from most of the tourists. Unlike some of the other ports, right now we are the only ship docked. That makes the numbers of tourists not such a big impact on the town (unlike an Aida & Fred Olson ships also in port). I don’t think it is going to make any difference on the ships ability to get people back on board which has been drastically lacking in the last couple of ports.

(BTW – Stu reports that 17 in Roman Numerals can be anagrammed into something, which in Latin, comes out to be the equivalent of “my life is done/over/I am dead” etc. I think it means that someone, somewhere had way too much time on their hands and was into superstition rather than working for a living. So if you are Italian, you don’t want room 17, Deck 17 or probably train 17 or Flight 17. Me? I need to go and see if there is some number in Kabbalah which holds the same place in insanity)

My major stop today was El Corte Inglais where I bought a tape measure for Carmen and a seam ripper for me. It is not that I don’t have several at home. But they are at home, I am on ship and have a few stitches to un-pick in the current cross stitch. This is 22 count canvas and I really don’t want to either damage it with scissors. 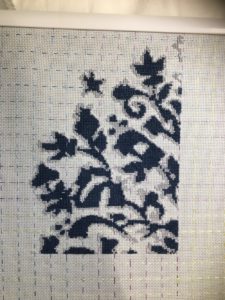