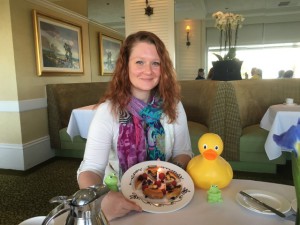 Since it wasn’t going to be possible to take her out to diner – we elected breakfast at the Claremont. It is the first time we have been there since Fairmont Hotels took over the location. To say that there is a bit of renovation and redecorating is a massive understatement.

Noah, as always comes up with some of the best gifts (the giant rubber duck, some companion green frogs). Ours were a little more mundane but as well appreciated.

After breakfast the two of us had a bit of a run around as I attempted to find some insect repellant as it turns out not to be routinely stocked when “not in season.” Not that insects really care about seasons if they are alive and biting.

Anyway, car to BART. BART to SFO. SFO -> FRA via Lufthansa. I should have time between planes tomorrow to further fill you in.