It wasn’t as hard finding George as I thought last night. Ignoring the recommendation of taking a cab (~60$NZ) and taking the SkyBus (16$NZ) it turned out that stop #4 was right in front of the hotel. Easy, convenient and on Queen Street.

So this morning we walked the few blocks to the harbor for breakfast followed by a stroll through this portion of the downtown area. Imagine my  surprise to seeing the Explorer of the Seas at dock. Although thinking about it, it shouldn’t have been a surprise at all. She has to be somewhere and is doing a NZ trip prior to the TransPacific run. After being totally confused, I realized this is her last port prior to Sydney, then she has the next 12 day run before I board on the 23rd.

And back to the present and ending the speculation. There are a lot of sporting goods stores in this area. Except for one, it didn’t seem like much of anything was on sale. And that one had signs all over the place about “the new summer styles.” Considering we are in the Southern Hemisphere and it is getting on toward autumn, that feels like the adds are a bit off.

Our guide for the next couple of weeks met the group ~1100 for a quick walk about which included information on several museums, a wander up the hill and around a portion of the Uni grounds before saying that we would get together at 1530 for the admin “stuff.” Dinner was with the group and it is now a more than adequate time to head to sleep…. 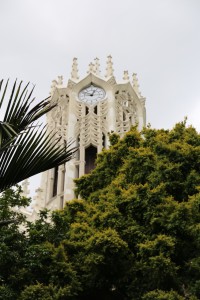 Clock Tower at the University 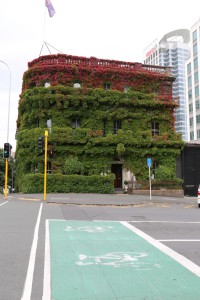 Once a men’s exclusive club, it now has both women and ivy 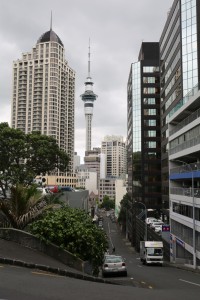