There are days when I work on a number of projects – ranging from stitching to cleaning to reading or machine embroidery. And sometimes within a category the item/s are one or many.

Today was a bit more sensible. From my upstairs window, I could see Sausalito and the Bay Bridge clearly for a change. But then it is Sunday with noticeably less air solution. There were a variety of entertainment options – Baseball has started which provides the listen/watch option. there are audio books, and then there is the insanity of YouTube for which there are a bijillion and one choices.

But the day came down to opening yesterday’s mail which had arrived later last evening. George refers sometimes to my daily packages; which are neither daily nor often packages. I don’t call envelopes packages, but anyway…. 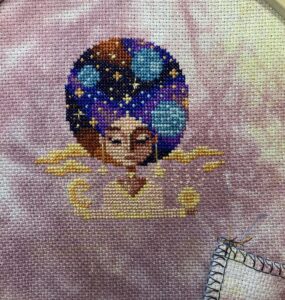 I might yet go back and add some backstitching – it depends on how she looks when set in a framing hoop.

Floral dreams is 4300+ stitches (not the 2600 I was remembering) so adding 1350 stitches meant progress but there are a lot of flowers and color changes left. I would really like to get this finished as the Raccoon from the Year in the Woods series really is asking to be started…. 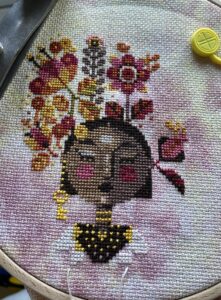 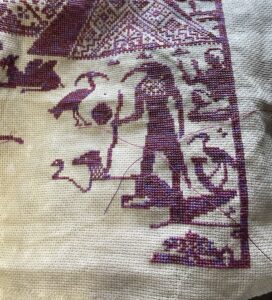 554 stitches of fill-in of the Nile skiff. a fish, and what looks to be a dog head. I don’t see this finished before I head to San Diego for the NCL Jewel – but it just might be a cruise finish…

(You Belong to Me – LongDog Samplers).

and tomorrow is Opening Night for the As. For anyone who has TV access – you just might want to see the 20 minutes before the game. Apparently the lousy As front office has figured out that the Drum Section (which makes other team’s fan groups totally insane) might just as well be incorporated into Opening Night. Jorge (the head of the ’68ers Fan Group is working out the details but we just might be on the field to drum in the players…. (of course with an 1840 game start, the time zones suck for most of you….