↓
Home→Fiber→Cross-Stitch→Seven down – one to go

and it is update and photo time…. 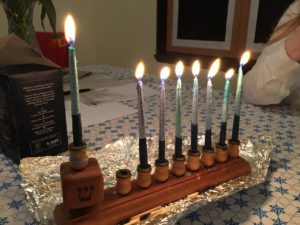 not quite a meltdown

As I have mentioned numerous times, I am not a particular fan of the movies. With a bit of concentration, I can probably count on the fingers of one hand the movies I have seen in the last six years (give or take a few months). It isn’t that I haven’t tried to see the occasional movie, but the idea of paying to watch something in a location where, if I get bored, I would be unable to knit without bothering other people doesn’t appeal. Given the amount of air travel I’ve done in the last half decade (now, doesn’t that sound cool?) it might surprise you to learn that the last time I watched a movie on a plane was in 2010 on the way to Melbourne. The movie was Tim Burton’s Alice in Wonderland.  On one of the transatlantic crossings where I had free access to the DvD library I saw Frozen and ???? (another cartoon type thing) which was kind of cute. Then, Shana and I went to Ghostbuster’s. Today I completed the handful by going seeing Moana with 3/4 of the off-spring. Dani was working and Alex had already seen it. My actual vote had been Trolls – but I wasn’t willing to drive an hour.

It was cute, and now I have been provided a list by the kids of various animation, and stop animation which I might enjoy. Obviously, my idea of a good movie is something that is fun, creative and not scary, loud or violent. Most of their suggestions are available on Netflix (which I don’t have) or on cable (? we do have Comcast as an Internet provider).

Managed to add about an inch to the hat and another five rows to the cross-stitch. As you can see, I’m actually getting close to finishing the first page. 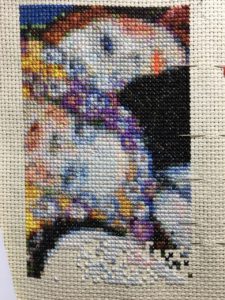 at least, that is what my chart tells me. 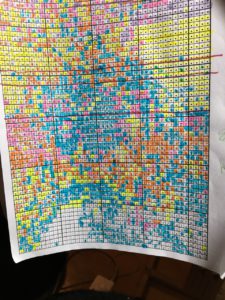 marking off as I go

Haven’t had as much of a fatigue reaction this week as last but I am trying to be careful about avoiding cuts, scrapes and obviously ill people as my lymphocyte count heads toward oblivion.  What did I say about tired? I think my pillow is calling my name.