Actually, the Best Western Hotel, located just a stone’s throw from the Seattle waterfront, seriously reminds me of the Marine’s Memorial Club on Sutter in San Francisco. Or perhaps the Claremont in Berkeley (prior to renovation). It has an old world feel about it. Curving staircases with actual carpet and polished wooden balustrades. The furniture is glowing, polished hardwood with the kind of details not seen in your average chain. From the outside, it really isn’t much of anything, which is why I didn’t immediately spot it when walking from the Pioneer Square light rail stop. This particular hotel might be named “Pioneer Square” but that isn’t where it is actually located. I really, really appreciate Google maps as I hadn’t gotten around to printing directions ahead of time. 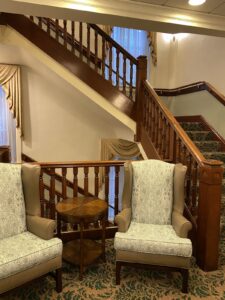 Supper was easy – I walked along Alaska Way (or whatever it is called) till I found a take-a-away seafood place). It was a bit more than a song, but the price for fish & chips was more than reasonable. eat

Now, you are probably wondering what I am doing in Seattle, especially without giving some of you advanced notice.

Well, it is like this. I decided to take advantage of RCCL’s offer to participate in a five day “simulation” cruise. The destination may/may not include Ketchikan depending. The ship is the Ovation of the Seas. The one class of their ships which I have never sailed.  The daily service charge is not included, but I do not have to pay for my cabin (balcony – thank you very much).  I can role play if needed, but frankly, I am planning on five days of stitching at sea – what more could I want?

Oh, yah – where to find the ship in the morning. That little bit of critical information was not on any of the documents which I received. It isn’t in their app. After not seeing the information on the Port of Seattle website – I attempted to call Royal. Nice kid answering the phone, but he hadn’t a clue and couldn’t find one after checking with three supervisors. I hung up.

Called the Port Master’s office. The lovely lady laughed and told me “Pier 91.” Apparently I was not exactly the first person who called for that particular bit of information….