We left Funchal last night and have spent today steaming (well, this is not exactly a steamship but you know what I mean) toward Tenerife where we should dock tomorrow morning.  I had plans for tomorrow, most of which involved a nice walk and stopping at El Corté Inglais while I was at it. Tomorrow is Sunday. So far, I haven’t been particularly impressed that either Spain or Portugal really care about the old fashion Sunday closing laws that are in effect still in many European countries but we will see… 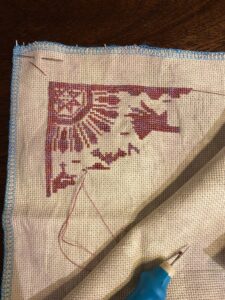 as well as the Barbara Ana dreaming of Klimt.

The passenger group is totally different this time. A more international mix which is not surprising since a number of them winter on various Caribbean Islands. Obviously, a ship is an elegant and comfortable way to go home. And actually significantly cheaper than airfare once you add in the luggage that many of these people brought along. Makes sense. I do take a bit for more six months as apposed to four weeks.

Dinner was a lovely salad. 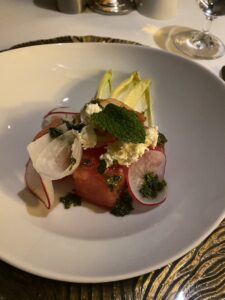 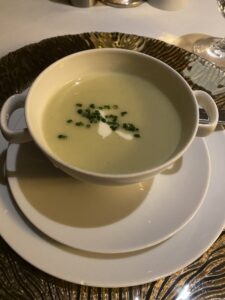 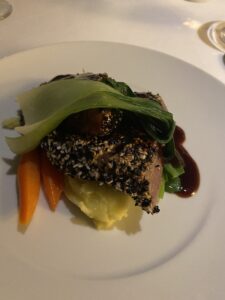 I disappoint the staff. I have been eating by myself and reading a book on my phone. Dinner than way is 45 minutes. If I share a table with others it takes 2 hours. (why would I want to cut into my reading or stitching time???)