After having been reminded by Ron that I could track the location of the ship by Marine Tracker (or one of several other options available just for anyone in App from their favorite on-line source), I decided to take advantage of this cruise line’s open bridge policy.

At this point, there are 119 passengers and ~190 crew. There are 22 nationalities among the crew and a good dozen among the guests. Windstar, like many shipping & cruise lines, provides training space for maritime cadets. The current person is from the UK. His previous stint at sea was on a cable layer. The program alternates between several months in the classroom with a ~ 3 month stint at sea. One of the bridge officers mentioned that one of his rotations as a cadet had been on a Windstar vessel He had enjoyed the passenger ships more than bulk haulers or tankers (two of his other opportunities) and had decided to head into this particular segment of the sailing industry. 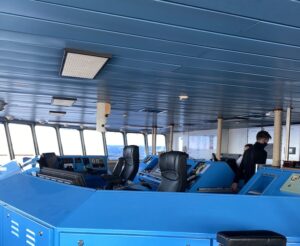 The chairs are new, the cabinets older. The bridge is almost entirely electronic to include monitoring and course charting. They do have paper and sextants as an emergency backup (and taking the early morning readings falls to the cadet).
I think this portion of the deck (being above new passenger cabins) was part of the stretch – 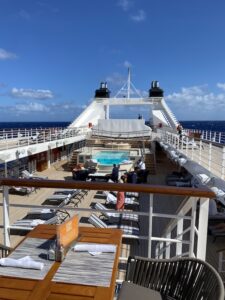 with the usual deck chairs, mini-dipping pool (I can hardly dignify it with the label “swimming pool”). The hot tub seems to be a lot more popular.
and then I headed back to my audiobook and stitching…

another ~1000 stitches means that 1/12 pages are totally complete and I have a really good start on the second page. (4 across/3 down)

Barbara Ana’s Dreaming of Klimt – complete. It turned out to be slighting under 300 stitches left rather than the 500 that I thought.