It was an adventure getting off the ship this morning. I can’t even start to imagine what it would be like if the ship was full. We came into Brisbane right on time. 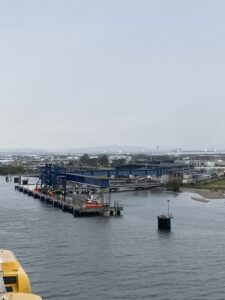 that is our pier – all those blue ramp looking things are the enclosed walkways which will get us from the ship to the arrivals hall. If you click on the picture (on the blog) you will get a larger version which just might be easier to see.

After breakfast in the dining room, we hung out till just after 0800. From the ship to the arrivals hall was apparently about 400 meters according to one of the guides. I have no reason to doubt the information. That portion of the trip – as part of a long, long, long line of people took about 40 minutes. It seemed that about half the ship was attempting “self-assist” walk off for whatever reason. Among those passengers obviously were those too old, too infirm, too much luggage to safely handle; or pick D) more than one of the above …. 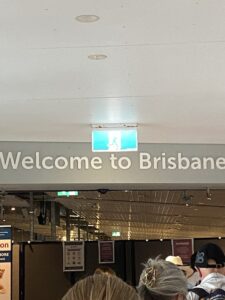 the upshot was that once we entered the arrivals hall and had to clear immigration – there were those having a really tough time.  Instead of a straight shot, we wove through eight (count ’em – 8) lengths of the hall between those wonderful post/band things that are beloved of airport security everywhere. Remember I mentioned that there were those with luggage issues? I counted three serious crashes during my 15 minutes of being herded back and forth.

Immigration itself was a breeze. Hand over your passport, show your face, wait for the computer to verify that YES, you have completed the electronic visa and paid your fee. Move on to the baggage hall, collect luggage and then take a rest break before the next bit of adventure.

Rarely seen during the cruise – the ship’s Captain was actually in the outside area. Why? Well, as it turns out, this is the first time that the Quantum of the Seas has docked in Brisbane. For that matter, it may well be the first time the ship has been in Australia. 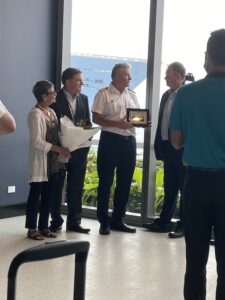 From there it was maneuver through the crowds to get to the ride share location. Jill had pre-booked an Uber which turned out to be an excellent idea. The taxi line was still several hundred people long at the point where we loaded and left.

it is early in the evening but I am really tired and going to sleep early I think….