Is the island. Fira is perched 533 steps above the harbor level. It is just one of the Greek islands which are the remains of an old volcano. The caldera is filled with water and deep enough for ships to drop anchor.

looking out over the Caldera

with a small island in the middle

From the ship the tops of the mountains and hills on the surrounding islands appeared snow capped. At closer look, the white is all the small villages of whitewashed homes and shops crowning the peaks. Greeks aren’t stupid. Yes, it is uphill to home at the end of a long day of fishing. But It is easily defended as they have learned over multiple millennium of raiding and wars.

one of the other islands

The alternate to hiking up the 533 cobblestone steps 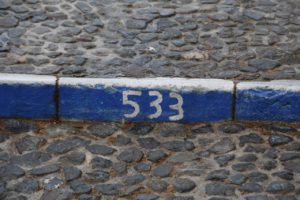 there were more steps , this is the end of the donkey ride

would have been the cable car which seemed to be the preference of most of the early visitors.

The traditional alternative is to ride a donkey up the stairs (no one had mentioned the mules – there were almost as many mules as donkeys).

animals waiting on the stairs

and often blocking the whole width

The combined effect of almost 600 animals might explain some of my challenge in hiking up the multiple switchbacks freely littered with manure.

In Fira it becomes apparent that white has multiple shades from cream to snow white. The occasional blue accent is tossed in as a nod to the Greek Flag. I had a nice wander but it became readily apparent that Santorini has much in common with St Maarten’s and St Thomas. Shop after shop with souvenirs, clothing or jewelry. Bars and restaurants filled in the gaps. 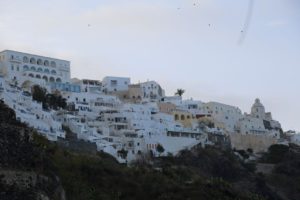 I lasted until it started getting crowded before returning to the ship. Before noon on a day which the last tender was 1930. Part of my discomfort stemmed from having three other ships in port.

Not a cruise ship

And yes, that is Mein Schiff #3, as apposed to 1,2,4, or 5. #6 is currently under construction. A lovely woman who lives just outside of Hamburg mentioned the lack of imagination and that she prefers traveling on other than German Cruise lines. We had a lovely chat about our experiences on Explorer of the Seas last year as she was also on the Barcelona to Suez repositioning cruise.

I also appreciated having plenty of time prior to sun down. Tomorrow we dock in Piraeus. Having been there multiple times before, I will just relax on ship. Hiking while fasting is less than ideal.