When I disembarked today and didn’t recognize the buildings nearest the pier I realized that it has been a few years since I made a port stop in San Juan.

The visiting ships all dock @ Old San Juan (the better to separate you from your money my dear……). It wasn’t like I had any place that I wanted to be or things I really, really wanted to see. Arriving early (well 1215 is early if the ship is scheduled for 1300) we could see the Veendam (HAL) and Carnival Sunshine all ready at the piers.  One ship is smaller, sedate looking and has a couple of hot tubs along with a lot of loungers on deck. The other is significantly larger with four water slides and a sports court on the upper aft of the ship. I will leave it to you as far as which ship is which.

Ignoring all of the usual tourist/cruise port gift shops I focused on what was new – there is now a Walgreens as well as the CVS. At prices that are less than 1/2 of the ship – it was a good place to pick up that sunblock I forgot to pack. Since tomorrow is St Maarten and the weather is suppose to be good – I will need it.  I also purchased a coffee mug, just so I can stop drinking out of paper cups…

Otherwise – there has been some recent painting of buildings-

The streets are still narrow

and the fort still sits on the hill 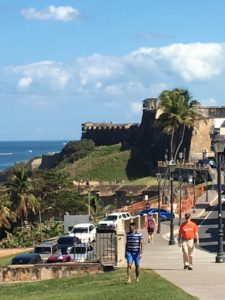 by the time the Oasis docked I had been long back on the ship.

The ice show this evening was the first of the performances I have seen. Unfortunately, the Cruise Director didn’t bother to introduce the skaters. Several of them looked quite familiar so I am thinking that various teams might just get bored with one set of performances and move ships after a couple of years. On the other hand – chocolate covered strawberries never get boring…..