It was earlier than I planned on rising, but the change in both ship movement and sound was obvious. From late in the evening to early this morning we made the slow, comfortable sail  up the inlet between Vancouver Island on the left and Olympia National Park on the right.  Not surprisingly as it became light this morning, the temperatures are cool and the sky overcast. 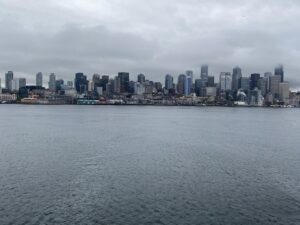 I had my last look at the skyline as we turned to dock at Pier 66. 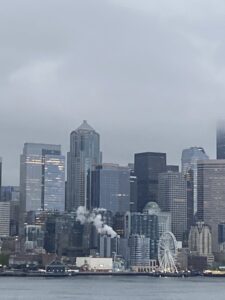 Once docked, my balcony looks out over the harbor. At 0700, I don’t see any point in getting off the ship for a couple of hours.

At 1100, I had even less reason to get off the ship. The outside temp was 10*C (51*F in old money). Today is Monday. For anyone who is a crafter, knitter, spinner, stitcher the follow on is obvious. Seattle is not a small Alaskan town dependent on the tourist trade. All those lovely small stores are open on Saturday. And reopen on Tuesday. Which, obviously is not today. Instead, I stayed in the library, sitting at the table this time and chatted with various people who could actually identify cross-stitch (and that it wasn’t crochet…..).

No other photos today, this has to be posted prior to our 1600 sail out (! not bailout as auto correct would have it). Tomorrow is a sea day. Although we might be close enough to shore to use my phone, I don’t trust AT&T..