My ship this time is the NCL Jewel. I went and looked it up and it seems like the last time I sailed on her was in the Med back when Miriam was about 16 (so about 13 years ago).

Boarding is obviously in

Sunday, May 1 At Sea

My flight this morning was fine. Poor George had to get up extra early to drop me off at OAK. The NCL airport crew from LAX was bussed down to meet us at the airport where they finally found the group of us hanging out and waiting.

We arrived at the port and were checked in. They let the first batch of us on ship at about noon; I promptly headed up to Deck 12 and found a lovely veg curry with rice and plenty of lemonade along with salad and fruit. The buffet is all self help. Being the first through the line isn’t an issue. If I don’t want to do that – I am probably going to be doing a lot of take away from a couple of location.

When the cabins opened at 1330 I had a lovely surprise. This is not the Oceanview cabin I had booked. Instead I am in a balcony cabin on Deck 8! 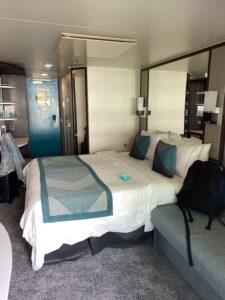 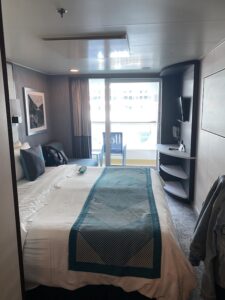 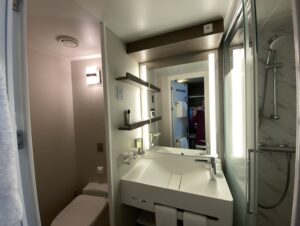