are those locations where you tuck away things too important to lose. Those critical things you don’t need on a daily basis but absolutely need to be able to find when you need them. Obviously wallets and keys don’t fall into this concern. Those are found, misplaced and hunted for by many on a close to daily basis. In my case it doesn’t even include my passport as that lives in my wallet as a side effect of living OCONUS and traveling for so many years.

I am talking about where you may tuck the family documents – those birth and death certificates, marriage licenses, school transcripts/diplomas which, as my son discovered, you do need on a blue moon. His need was related to getting his driving permit. The Oakland DMV wanted two IDs. They were happy with his school ID but didn’t want to take his passport as a second form of ID. Yes, you read that right – the woman at the counter wasn’t sure that was official ID and asked him if he could bring in a birth certificate. We have one, tucked in an appropriately labeled document protector in a binder. Which was in a box in my studio. He found it and decided to go to El Cerrito DMV instead where the gentleman just shook his head and used the passport.It has a picture. Anyone could present a birth certificate….

Safe places – right. There is no such thing as a safe place (outside of a real safe) in a domicile that is hit by professionals. Not if they have a few hours in which to search all drawers and cupboards as we found out to our chagrin about a year ago in Heidelberg.

But I can tuck something away so safely that I can’t find it.

Take, for example, my small Canon D20. It is waterproof. A great size, it fits in my hand and has a cord with chinch so that you can manage to snorkel or dive without running a high risk of dropping the thing. It even has a great color adjustment underwater setting. It went with me on my last round the world jaunt which is why I just knew it had to be in the house somewhere. Tucked away in a safe place. Last weekend, before setting out for the American River I went looking for it. Took apart my camera equipment bags completely but it didn’t turn out. I found a few other things, but neither the D20 or extra memory chips. (Extras are always good, only thing worse than having your camera battery die without remembering to bring your charger is to have a chip give up when you don’t have any more…). Couldn’t find it. Looked in all the usual suspect places which are actually limited in this new house. Not in the closets, studio, drawers.

I gave up and resumed the search before we drove to the Trinity River thinking it would be really nice to bring along a camera which didn’t have to stay in a waterproof bag. Again, no such luck. I am now getting pretty discouraged. Canon doesn’t make this model anymore. In fact most of the major manufactures don’t bother as the Go-Pro has really overwhelmed the market.

This morning, after George left for the airport (DC three days of meetings) I started cleaning up the bedroom. Pushed the bed back from when the window frames were being painted. Picked up “stuff” from the floor and then tackled the small table I use as a night stand. 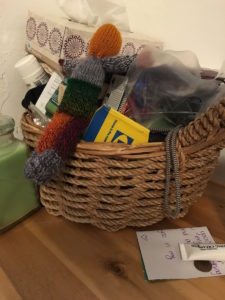 The one hanging down right next to my OysterCard folder because one always has to be ready to travel the London Underground. The poppet was made in last fall’s Suez trip knitting group. The only thing that would make my “safe place” more obvious would be if it was resting on top of a towel.. 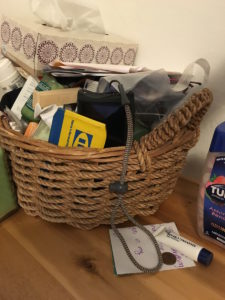 pulling on the cord

gave me a small bit of hope. I have two small pocket cameras. This was obviously one of them. The other has obviously found it’s own safe and comfortable nest. 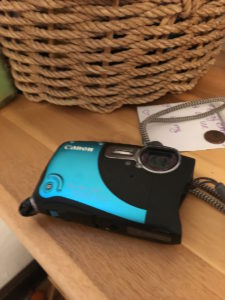 and there it is!

It still has photos not downloaded. The battery works. Wheee!

Now where should I put it so that it is safe till I need it the next time?