Another of the Greek Islands, Rhodes is geographically located such that it has seen successive waves of Greeks, Romans, early Christians, Byzantines, Crusaders (the Order of St John comes to mind), Ottomans, and more recently the Italians have all had a role in shaping the city in history, people, architecture.

Like many of the older port towns which are not particularly modern, bustling, present day commercial ports, the cruise ship terminal is located with in walking distance of the old city.

Mostly what follows are photos of the various buildings, ruins, reconstructions and the older portion of the town. I set most up as galleries so that you would not be overwhelmed with huge pictures. Right clicking should bring up a slightly larger version. But first, a short orientation: 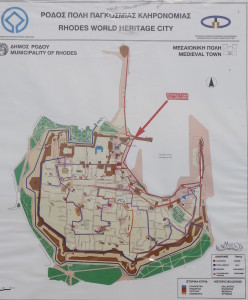 The ship was docked along the pier to the right side. There is a small spit on land which extends out on the left (and west) side of the harbor. The major lighthouse of is located on Fort St Nickolaus which was built in the 15th Century 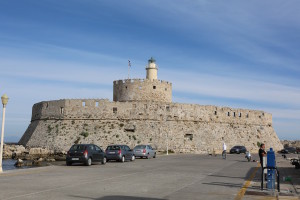 located on the extension stretching out to the north

to the left the walkways end on both sides, leaving a small entrance to the harbor guarded by the two deer – as customary, the buck is on the left and the doe on the right.

All of this I explored later. When we left the ship after walking along the harbor we headed into the city with its own interesting details (photos from both before and after the palace)

towers at one gate

area on one of the fort outcroppings

detail over a city entrance

completely with mosaics (most “obtained” from other locations)

otherwise – there were doors

I wandered out to the Ft Nikolaus on my own. Finding that the three towers I had seen on the way in turned out to be permanently decorated as viewed from the city.

and the actual fort –

walking toward the fort

entry into the fort

underneath, with the second level overhead

door to the tower

canon balls in the walls

left over from one of the attacks