What did I say? Nothing major on the table this year. No “must read so many books or finish x many hats or ……” I’m not even committing myself to having the garage organized by the end of the year.

When I told Cat the following:

My only real resolution this year is to enjoy each day. And to accomplish a little bit, whether it is cross-stitch, knitting, reading or just running errands for someone else. Not boxes emptied, not countries visited or miles flown.

That’s not a resolution – that is plain good ordinary common sense….something most people lack.

Now, I am not going to claim practicality, or common sense most days. But given an opportunity to re-home items? I’m all over it.

So there I was at Stone Mountain and Daughter going through the apron patterns (I have daughters who like aprons) and the sale patterns when I over head a conversation across the table from me. It had to do with whether or not a particular fabric looked “galaxy enough” to make a corset cover. I looked up and asked what to me was the obvious question. “Cosplay? Convention? Costuming, Just because?” Turns out the answer was Star Trek Conventions. Full on corsets, as in traditional or adapted to modern?  Mostly modern.

Humm – would she like a corset kit? I had purchased one several years ago then decided I wanted nothing to do with back lacing (traditional Renaissance) corsets. It needed a home.

End result is that the young woman plus her mom and mom’s friend stopped by the house after making their rounds in Berkeley. By this time, I had unearthed the four original Star Trek Uniform patterns I had on hand plus a number of books on fashion, costume and pattern design. All of them went off to Oakley in the hands of people that will appreciate them. I don’t have to feel guilty about attempting to sell them at a used book store or messing around with eBay.

Now, if the Northern California Handweaver’s Guild comes through for me with takers on some of the weaving equipment…..

Only seven more rows, but it feels like I am making progress….. 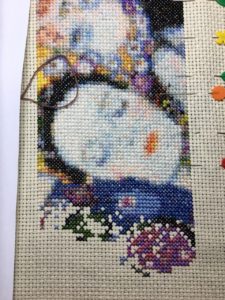