None of us remember WWI. In fact, most of those who served in WWII are gone. I am  of the Viet Nam & Cold War generation. Only one of my four is old enough to remember a divided Germany and the Berlin Wall.

Like many other remembrances, the US seems to have turned Armistice Day into an excuse for retail sales.  The name change to Veterans Day actually happened in 1954. I had thought it was much more recent.  It is one of the few US federal holidays with a fixed day (not floating) although there is a tendency to grant a floating day off. In the Commonwealth – it is Remembrance Day.

I had the privilege of spending the day with Val & Ian, two lovely cruisers I first met in 2013 on the Radiance of the Seas Circumnavigation. We connected again on at least one Transatlantic cruise and have stayed in touch by email.   They picked me up this morning and we drove south to the Royal National Park, 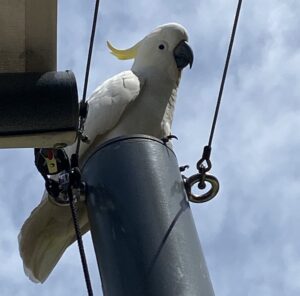 then to the Sea Cliff Bridge which we walked part way after stopping at this monument (not all aviation originated with the Wright Brothers….) 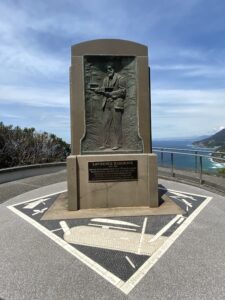 and along to shore to more lookouts… 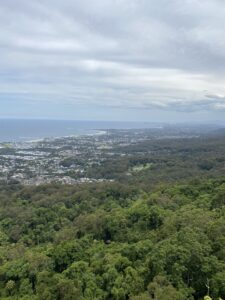 It was a lovely day and I am hoping to be able to host them in the future.

My balcony faces the Sydney Opera House.  I was able to watch the concert, see the building lit with Poppies in remembrance 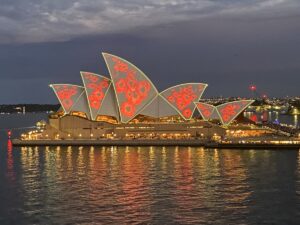 and watch the fireworks.

fiber person - knitter, spinner, weaver who spent 33 years being a military officer to fund the above. And home. And family. Sewing and quilting projects are also in the stash. After living again in Heidelberg after retiring (finally) from the U.S. Army May 2011, we moved to the US ~ Dec 2015. Something about being over 65 and access to health care. It also might have had to do with finding a buyer for our house. Allegedly this will provide me a home base in the same country as our four adult children, all of whom I adore, so that I can drive them totally insane. Considerations of time to knit down the stash…(right, and if you believe that…) and spin and .... There is now actually enough time to do a bit of consulting, editing. Even more amazing - we have only one household again. As long as everyone understands that I still, 40 years into our marriage, don't do kitchens or bathrooms. For that matter, not being a golden retriever, I don't do slippers or newspapers either. I don’t miss either the military or full-time clinical practice. Limiting my public health/travel med/consulting and lecturing to “when I feel like it” has let me happily spend my pension cruising, stash enhancing (oops), arguing with the DH about where we are going to travel next and book buying. Life is good!
View all posts by Holly →
This entry was posted in Military, Travel. Bookmark the permalink.