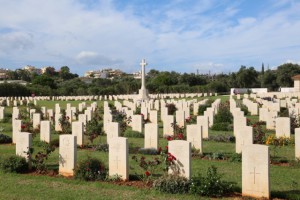 Crete has seen wave after wave of invaders over the centuries. It was the site of major invasions during the World Wars. It was a battleground, a blood bath and is now a place of remembrance. The Allied Cemetery was established and holds the remains not just of the English, Scots, Welsh but Canadians, New Zealanders and Australians. Fully half the graves hold unidentified remains for in many cases neither ID nor relocation was possible. Those that survived those early days of battle starting 20 May 1941 were evacuated. The dead, quickly buried, remained behind.

It is peaceful, the visitors respectful. And these are the rows upon rows of those who are buried here – there are names and dates where they are known, regimental identification is all that is known for others. For others it is only country that might be known. Ground forces, navy, pilots and crew all rest here together. Religion doesn’t matter, country of origin doesn’t matter. Some graves have momentos from family, others pebbles from visitors, some just cared for by the Commission.

fiber person - knitter, spinner, weaver who spent 33 years being a military officer to fund the above. And home. And family. Sewing and quilting projects are also in the stash. After living again in Heidelberg after retiring (finally) from the U.S. Army May 2011, we moved to the US ~ Dec 2015. Something about being over 65 and access to health care. It also might have had to do with finding a buyer for our house. Allegedly this will provide me a home base in the same country as our four adult children, all of whom I adore, so that I can drive them totally insane. Considerations of time to knit down the stash…(right, and if you believe that…) and spin and .... There is now actually enough time to do a bit of consulting, editing. Even more amazing - we have only one household again. As long as everyone understands that I still, 40 years into our marriage, don't do kitchens or bathrooms. For that matter, not being a golden retriever, I don't do slippers or newspapers either. I don’t miss either the military or full-time clinical practice. Limiting my public health/travel med/consulting and lecturing to “when I feel like it” has let me happily spend my pension cruising, stash enhancing (oops), arguing with the DH about where we are going to travel next and book buying. Life is good!
View all posts by Holly →
This entry was posted in Military, Travel. Bookmark the permalink.

1 Response to Remember them