There is this old expression that says – “It never rains, but it pours.” Said saying was also co-opted by Morton Salt, but I see no reason to go there this morning.

After all, the Bay Area has had enough disasters this year without going and hunting for me.

Well, yesterday – Tuesday 26 January 2021 to be precise, we just added torrential rain to our growing list of disbelief. It rained and rained. Plus the wind blew, rather important as this tale proceeds. This morning – we woke to the following on our back deck: 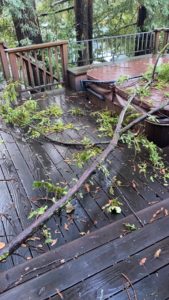 on the lower deck 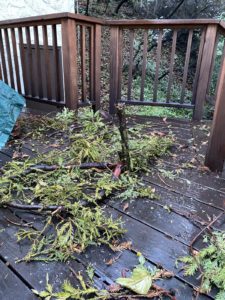 buried inches into the decking

Just so you know, that second picture was taken after I hauled this huge branch off the deck and tossed it over the edge.

We have cleared the cars off the parking pad (which involved heading to Dani’s work and getting her keys) and are now waiting for PG&E (Pacific Gas & Electric) because an additional branch or three has taken the power line which runs along our property line down. So far, we haven’t lost power, I think this line mostly supports the two houses just south of ours and up another one of the typical long, twisty driveways.

and it is almost time for yet another Zoom session (YAZS?)