Doesn’t mean that there is anything wrong.

Rather it means that the days are blurring into each other such that I (imagine this) can’t work up the energy to put fingers to keyboard. Part of that reason is that if I sit down to type, I really should be putting the finishing touches on “that paper” rather than chasing news or talking with friends.

Or reading books, exploring YouTube or any of the myriad other things that are oh, so tempting and completely and totally non-productive.

I am trying to avoid checking the news more than once a day. It doesn’t help at all. Especially since the US numbers are so totally out of whack with what is actually happening. The Worldometer, for example, is now listing tests run. Which, as it turns out, is a totally useless number. Why? It is tests. It is not individuals, which means that the number includes multiple samples for some, it includes post-infection clearing tests, etc. So it is not an accurate number at all of what is actually going on. But what it does is artificially make it look like the US is doing an adequate amount of testing (it is not) and that most people who get tested don’t have COVID-19. That also may be a very false assumption.

The other thing of concern, which doesn’t show up at all in those numbers is that California, for example, wound up more than 70,000 tests behind. Yes, that is right – 70k worth of tests sitting in the queue. I don’t know enough about the specific procedures to be completely confident that a sample that has been sitting and waiting for more than a week is going to be either a true-positive, or a true-negative. And frankly, a result coming back a week later isn’t of a whole lot of use. If you were the person who was tested, and not all that ill, you have gone on with your life. If you were in hospital, you were treated as if you were positive anyway.

Testing is best used for early diagnosis and prompt isolation/contact tracing. Even with social distancing, how many of us know exactly where we have been every minute of the day for the last seven days? Was there a grocery run? A stop to pick up meds? Costco? Target? Other box store? How about fuel for your vehicle if you drive one?

And if you weren’t sure – this is social distancing …. 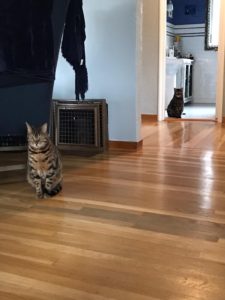 as practiced by Onyx and Ghost