I needed a day to myself. Why, you might ask and I will simply tell you that traveling with 15 of my “very best friends” plus driver and tour guide can be a bit wearing. Well, actually “14 of my very best friends” would be more accurate since I need to take George out of the sarcastic column and over to the side of love of my life/best buddy and heating blanket.

Since they weren’t leaving till about noon, no one had to be up for breakfast while it was still dark. In fact, I was about the only one there for the first 30 minutes of service. About that time, another group started wandering in as well as a few others from my group.

I spent a good portion of the morning downloading, backing up and editing photos – deleting a lot while I was at it. 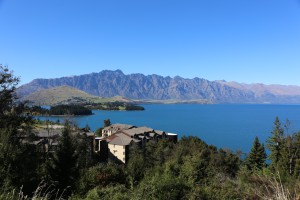 looking down on Queenstown

Then I set out to discover some of the hiking trails starting with the Fernhill Trail (easy – the hotel is up on Fernhill) which leads slightly across the major hill on crushed gravel before taking a switch back dive down the hill to end right near a small stream, an old power plant and a carriageway round about. Ok – then I knew where I was.

starting down the hill

From there my plan was to follow the One Mile Trail to about the half-way point, then catch the Skyline to the top of the Gondola trail. Famous last words and all of that.

I met a lovely young couple from near Stuttgart near the head of a water fall where I was trying to figure out what had happened to the sort-of signed trail. We managed to pick it up several meters up slope where it looked like we had missed a branch point. From there it was again back and forth up the hill (locals persist in calling this one a mountain) to a nice viewing point at the top.

much of the trail

one of many small water falls

And it was there where it became more than confusing. There appeared to be only two trails out – both of which were posted as bicycle and closed to pedestrians. After 15 minutes of casting about I decided that someone had fiddled with the signs and the only thing reasonable to do would be to head down hill since the town was obviously on this side of the mountain.

Carefully staying next to but not on some of the mountain bike trails I was treated to the sight of riders blasting past me having a wonderful time. About the third time I heard someone coming I had enough sense to have my camera in my hand. 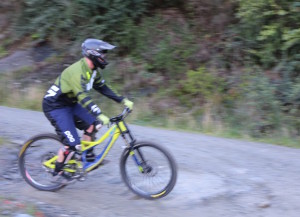 Winding my way back and forth, I managed to come down off the hill about at Thompson St with downtown Queenstown in easy walking distance. 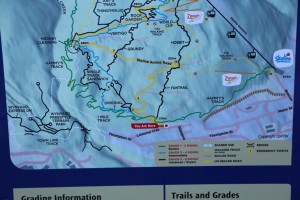 all that up and now back down

From there it was off to the water front, out to the Queens Garden which turns out to be that peninsula covered with trees easily seen from the hill and back on the far side while avoiding more bikes, skate borders and deciding against going ice skating.

I walked back via the shoreline followed by the Fernhill path again to avoid herds of tourists on the sidewalk heading back to the hotel.

So its back to the pictures, a bit more knitting, and the Faith Hunter short stories that I picked up from Audible at $0.49 each…..