When I saw us pull into the bay and then up against a simple commercial harbor. I knew I had been here before. Admittedly it was 2 1/2 years ago, but still – that road crowded with taxis and lined with stalls on both sides of the road such that it is impossible to walk was quite familiar.  All the close-in booths also sold tickets to the water taxis which, for $5AUD would take you directly to the main hotels and tourist shops without having to drag yourself up a hill or dodge taxis. 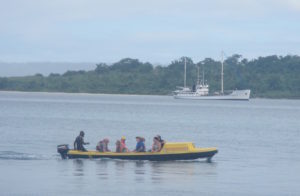 Once you walk out the immediate area, it is obvious that you are back in the developing world.  I headed up the hill and off toward the right to see what was there. Answer? Shipping, commercial areas, stores, and a lot of dirt streets leading to various quality of houses. 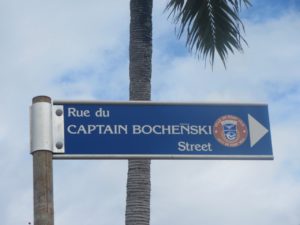 and listening to the local language. It isn’t that all the shop keepers don’t speak a variety of English – given that a huge number of their tourists come from Australia. According to Wiki – the population reported of the city is around 50k and it serves as the capital. Which probably explains me seeing the Parliament Building as I made yet another attempt to local the National Museum. But I am getting ahead of myself.

One of the earliest settled islands – archeological remains 15 centuries old have been found. There is a history with Portugal followed by the English and finished off by the French. During WWII – there was a joint Australian-US base located here.  I wish I could say that this information came from the Museum, but the small A-framed building mostly deals with the Pacific Islander past with a foray or two into sand-painting. I would not say it was worth a visit, except as part of a nice walk.  The only reason I found it all were the nice ladies in the Spice Indian Restaurant which is right at the traffic circle where you head straight to the Parliament & Museum or  left down the hill to the main part of time. Not only do they know where everything on the island is located, but they make a lovely lemon lassi.

I mentioned walking down another to the main tourist portion of town. The water taxis dock here. Also present is the local market. Not as beautifully presented as the markets in Bhutan, but wonderful fresh fruit, vegetables and tubers. I won’t make the same claim about the refrigerated dairy, meat and fish products. I did see some ice, so all was not as risky as it could have been.

After hiking about 12,000 steps I headed back to the ship. 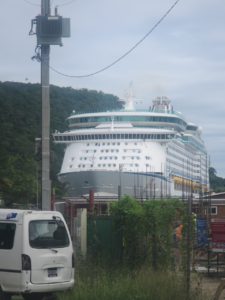