In case it wasn’t clear, this is a cross-stitch repeat. No trains, boats, or ships involved. I would say no planes, but that would be stupid since it is obvious that I flew out here and will be flying back on Monday. The idea is actually fairly simple; get a bunch of people together who have a love of a particular craft together. This particular retreat isn’t put on or sponsored by a needlework shop or professional organization. Instead, it is the work of a particularly dedicated needleworker & designer. Lot of work for the love of the craft. About ½ of the attendees live within reasonable local driving distance and are commuting daily. There are a number of others who drove from various locations on the east coast or south of here.  The maybe 1/4 remaining are from scattered location; two of us from California, one from Vancouver, one from Hamilton (Ontario), another Canadian, a woman from the Netherlands and one from Sydney (AU). I would have to look at the list to add in some of the other locations.

I am sitting at a table near the door. There might be more traffic in an out than I would choose, but the air circulation is great. Three of us are firmly and carefully masked. The other five at the table? Not so much – a three family generation group of stitchers who joined the first of us early this morning. This adds the oldest (82) and the youngest (14) stitchers to the mix.

Enough said on that.

This bear is still nowhere near complete: 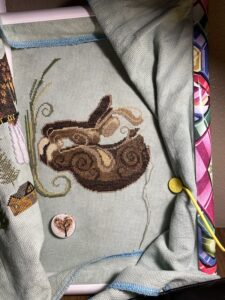 I should be able to finish him today – which will just leave the cottage and all of the cattails.

The fourth “thing” dropped on the WitchyStitcher’s Supernatural SAL. I got as far as I could with the treads I had with me. This leaves about 150 stitches to complete once I get home. 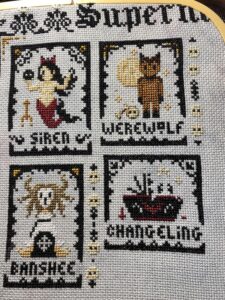 My last project of the day is a present. I decided that this was as good a weekend as any to finally finish it (last picked up in March of 2020).Of course, the fiddly bits are left. I am planning on taking photos of some of the items on the brag table in the morning..

But I have saved the most important part to the end. Tonight’s Pizza party was an included activity. There were four choices of pizza, there was salads, cookies, and canned drinks. The three of us decided that “smart” meant we ate in the lobby. We also packed it in about 2000. Others I am sure stayed till 2200….