As most of us might imagine, the overwhelming majority of of US veterans are male. It wasn’t until after the end of the draft that women entered not just the officers corps (nurses & admin) but the rank and file as well. It wasn’t that women didn’t serve, it was rather that their roles were much more limited and likely auxiliary rather than acknowledging that gender wasn’t relevant except as it played out in strength and ability. The WAC (Women’s Army Corp 1943-1978) was the repository of all Army Women except for those in the medical fields and I’m not sure about Chaplains or JAG (but I doubt that it came up often). It was still in existence when I joined the Reserves and I owe a lot to the advice of a crusty SFC WAC.

One of my early predecessor’s in the liaison position with the British Army Medical Corps was one of the first six women actually assigned to the US Army Medical Corps. It did create a fuss. Since this was all organized at the Army Surgeon General’s level, there was little the nay sayers could do.  It wasn’t like they were taking jobs away from men…. I don’t think placing physicians in the WAC would have been acceptable (to either the docs or that corps).

The integration of the nursing profession I found much more interesting in the UK. Queen Alexandra’s Royal Army Nursing Corps came into being in 1881, confirmed by Royal Warrant in 1902 and wasn’t actually integrated into the British Army until after WWII. Go figure. Up until 1992, male nurses wer part of RAMC.

Why am I providing you all of this? Back to the beginning. Women in actual service (read eligible for VA services) were not all that common until after 1978. Under 40 years. Since most of those who served prior to our frolics and stupidities since 2001, few had service connected disabilities (we will not go into the politics of what was and wasn’t service connected). That means that there aren’t that many “older” women eligible for services. The vast majority of those potentially eligible are under 65, likely still employed. The VA delivers an excellent standard of care in my opinion but it can be slow and ungainly. A female patient on the ward is not common, as I mentioned a couple of days ago. I am sure that is going to change in the coming decade – meanwhile – 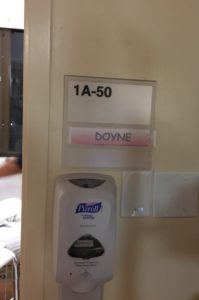 my name tag is pink…