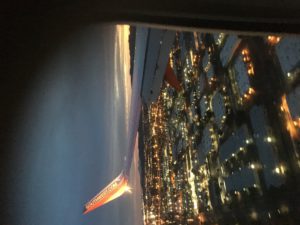 It was one of those exhausting days where you wind up deciding that not much has been accomplished. Not anyway in comparisson to the number of hours devoted to hanging and waiting.

It was a high speed pack this morning followed by hours at the VA where I managed to get most, but not all of an eye exam accomplished. I will skip the part about hiking afterwards down 19th toward BART with only those lousy rollup plastic shades for protection on what turned out to be sunny. Sunglasses? Of course, and forgotten at home.

I killed time at the airport. Managed the flight in the Southwest sardine can. Didn’t win any friends with the guy whi managed to wedge himself in the middle seat as the last paasenger on the plane when I insisted that the arm rest remain down.

So I was just recovering after picking up my rental car and heading out in the dark. Well, duh. It is night. But still no reason why the flipping GPS insisted on taking me the long way to thr freeway. A route which included a complete tour of parking lots, the cell phone lot and every single last one of the terminals. Argh.