is owned by Royal Caribbean (one of their several ship lines). It was the one class of their ships that I hadn’t cruised on. In general, I like the smaller ships. No, those do not have anywhere near as much in the way of whizz-bang. But then I am not particularly interested in ice skating, bumper cars, lounging poolside, disco dancing, casinos….. you get the idea.

What I want is a nice, relaxing time that I can read, stitch, chat with the occasional other person. I have no particular need to have fancy foods, I don’t drink, and have zero need to be entertained. I can easily and happily make my own fun without damage to self or others.

So here I am, on the Ovation because I just could not resist the free deal. Yep, there are none of the usual perks that come with loyalty club membership. But then I need only pay the daily service fee. Which, on anything below the nose bleed cruises, one always does anyway. Consider it a shake down cruise where the line is testing out handling of guests, feeding of guests, entertainment of guests while seriously attempting to avoid getting or spreading any particular viral disease. (Think COVID, but Norovirus should be prevented as well).

The highlights so far – all the safety briefings are done on over an app leaving only a quick stop in at the muster station. No standing packed on a deck with your new life-boat very best friends. There is now an actual handwashing area on entry to the buffet. Which is now a “point and be served, no help yourself.”

The ship is new and shiny, or at least feels that way. My cabin is comfortable with a decent size couch as well as a nice balcony. There is plenty of storage room on ether side of the bed, plus a dresser and a desk.(see pix). 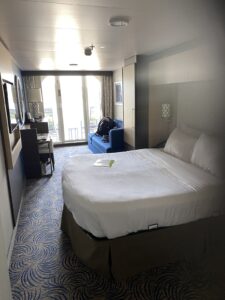 looking toward the balcony 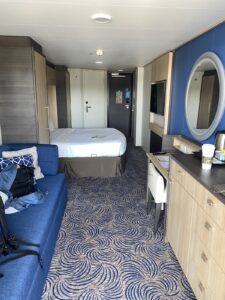 looking toward the door

The bathroom feels more like a single unit drop in more suitable for a plane or train. But since it is only me, it isn’t really an issue. 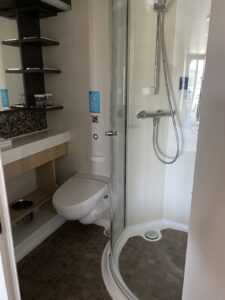 I can actually turn around without leaving the bathroom

Getting to the ship was a bit more “fun.” I checked out of the hotel right before 1100 as that was as late as I could without occurring an additional charge. Rather than sit around for an hour or so, I elected to walk toward Alaskanway in search of good coffee. All I found was Starbucks. Better than nothing, but it really seemed like I was the only person not looking for iced coffee. And was not quite, but close, the only person wearing a mask (the others were off Engine 5, Seattle Fire Department).

After claiming my coffee and heading toward the ship(s) I figured out that walking to Pier 91 wasn’t in the cards. Among other things (road and street construction) it didn’t look like you could safely get there from where I was at. Plus, three miles isn’t bad, but not carrying a backpack with electronics. Lyft is my friend. And it turned out to be a good idea – it wasn’t a six minute drive, more like 15 since the route involved bridges without pedestrian ways, car parks, security stops, and much confusion. My driver had never been there before (and probably will never voluntarily go again).

The entrance opened promptly at 1200. People were well behaved, the check-in personnel were still figuring out their hand held devices. I got lucky and didn’t get “selected” for one of the random COVID tests. I really really hate swabs up my nose… 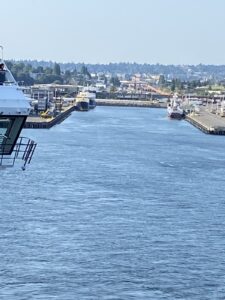 and a nice look at Seattle … 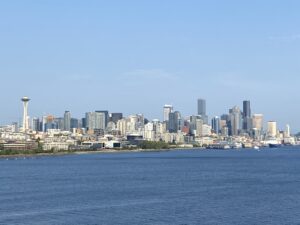 as we started out

the next two days will be sea days which means Ketchikan on Monday (when all the shops are listed as closed….)

Meanwhile, I am kicking back, stitching and listening to audiobooks… (and yes, I paid for Wifi….